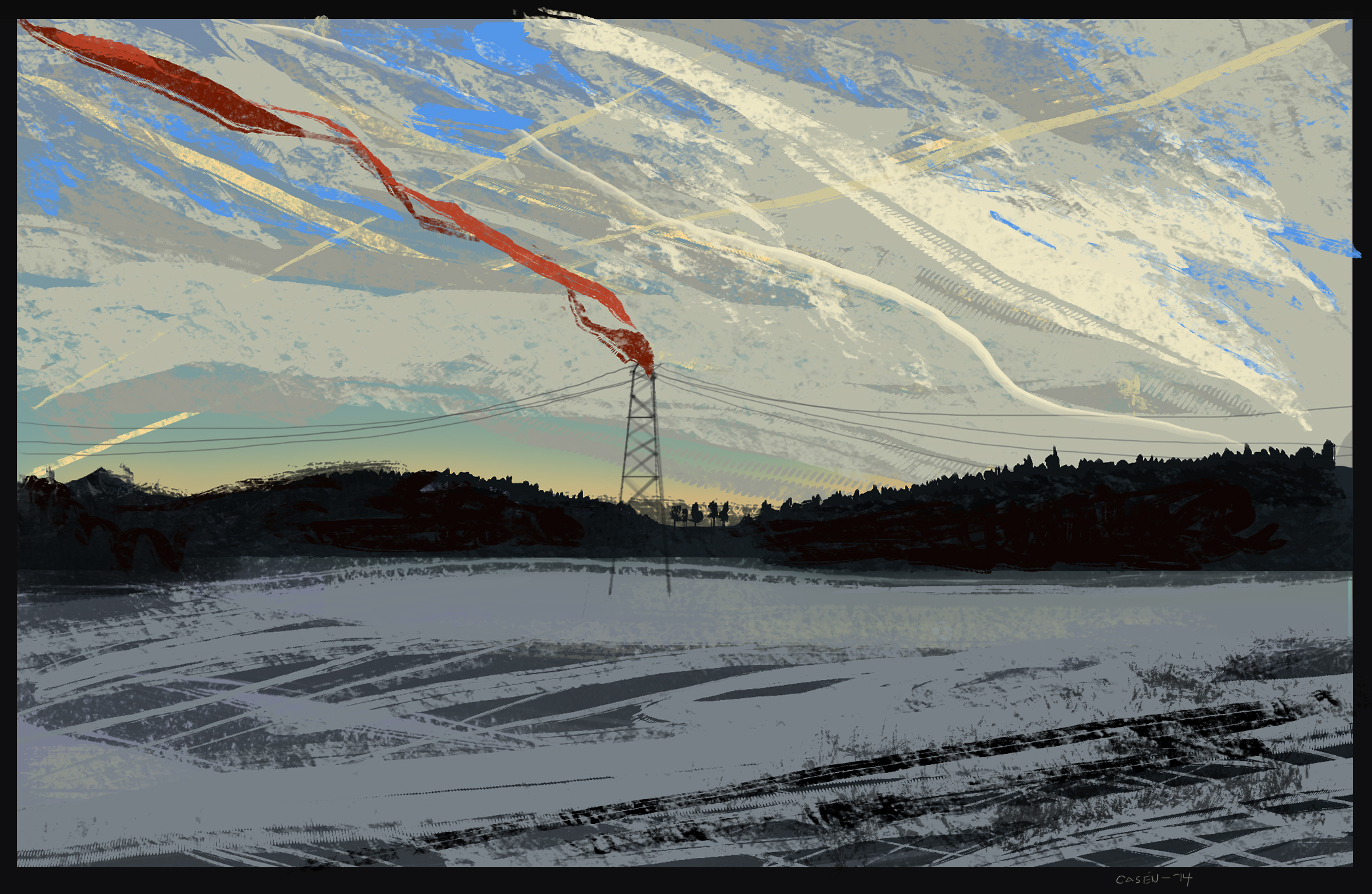 First post of 2015! Had a great New Year’s with a bunch of friends, celebrating, eating good food and just goofing around. It was all fun and games until half of us decided to go outside at midnight to watch the fireworks. Literally three seconds after they stepped out on the street a gang of teens aimed fireworks into the crowd and sparks and explosions were everywhere. Then someone started throwing beer bottles at my friends from a balcony. Fun times when you live in Sweden’s Gangsta City #1! I had a very nice silver dress I purchased the day before (thanks for that bunch of money Santa!). Did get some photos of the dress but out of respect to my friends I’m not gonna post them here, since everyone’s looking really wild and drunk in those photos, heh! Speaking about images, here’s a sweet Christmas card I got from Tarsier! 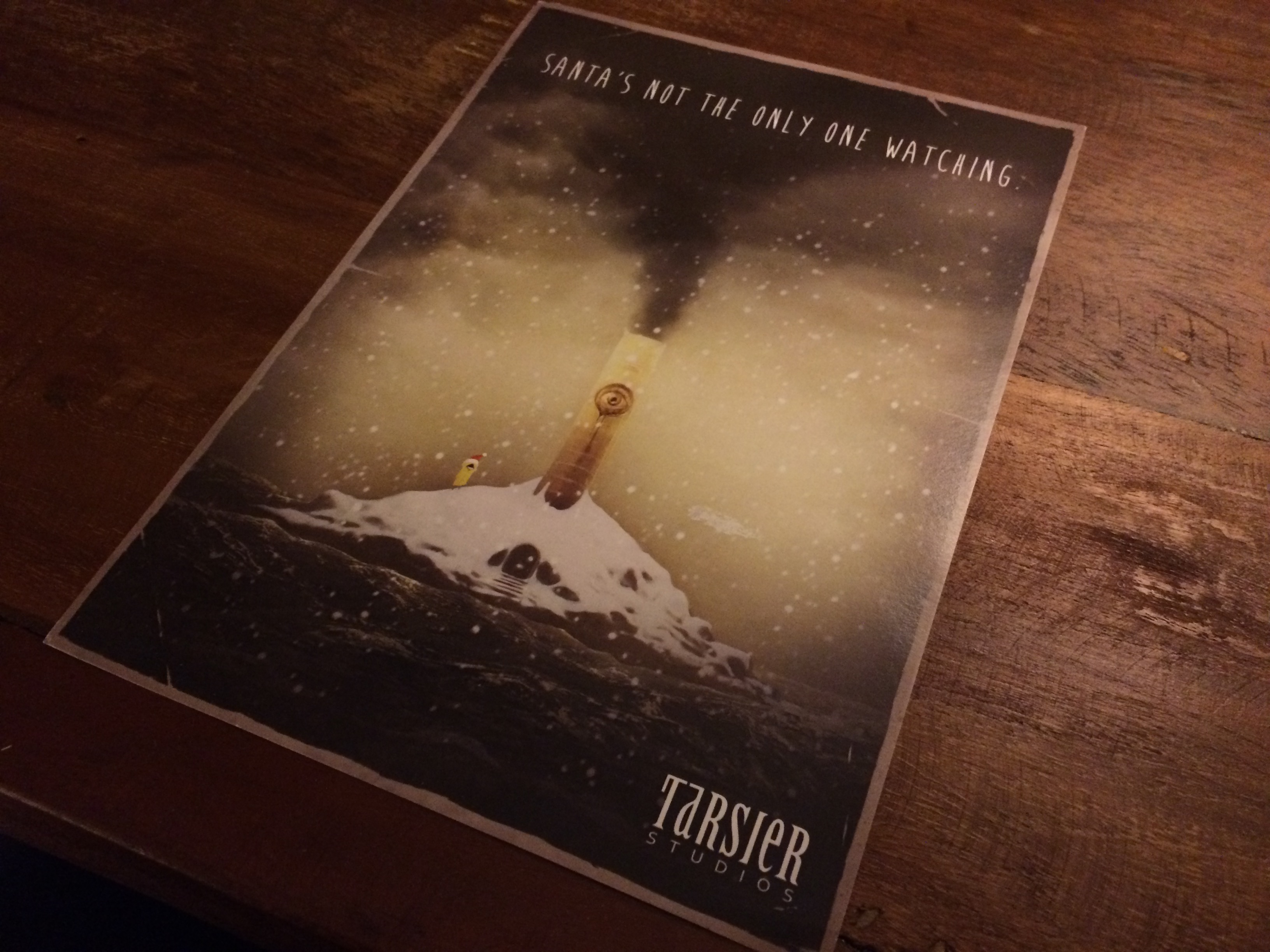 Looking back at 2014 it has been a very exciting year, but also one of the most stressful in a long time. I didn’t get to keep my job at Tarsier, and went unemployed for two months before I started my very own business; Casen Crowd. Running my own thing has pushed me miles away from my Comfort Zone™ more times than I can remember, which is awesome in some aspects but also extremely scary and tiring at times. I’ve learned that the Comfort Zone™ is a place where you should be able to rest and recharge. If you are always outside of it, you don’t really get to recharge your batteries or rest. This past year sets some kind of record in exhaustion for me. I’ve done almost everything to try to battle the sleepiness, and it’s working so-so. I’ve made sure to keep a steady exercise routine, eat my D-vitamin, fill my fridge with healthy foods and lately I’ve tried to determine the best time to go to bed and get up with this cool sleep-analyzing app (it’s showing me my body almost always tries to wake me up at 07-08 no matter when I went to sleep, guess I should take a hint from my body on this one).

I’ve done a lot of interesting work this past year: researched a big report about the state of the video games industry for Game City, helped Mediocre with their social media, made sure VisionPunk got some extra support for their awesome Unity Asset and accepted an upcoming gig as a project manager for a festival in 2015! I did lectures for The Game Assembly and at my old university! I worked the 2014’s Nordic Game Conference and got to the chance to meet so many cool developers < 3 I’ve also got something super cool coming up in 2015, but won’t be able to talk bout it in months (if ever).

Among all this I’ve learned some about how to run a small company, how to design logos, to build web pages, how the tax-system in Sweden works and soooo much more. Having my own thing has taught me more in 10 months than I’ve believed to be possible ^_^ Of course I’ve failed and had sleepless nights, but I kinda knew beforehand that comes with the package. One of the coolest things during 2014 was to get the offer for an interview as community manager for Riot Games in Ireland! For 2015: need to work on how to reduce the stress. 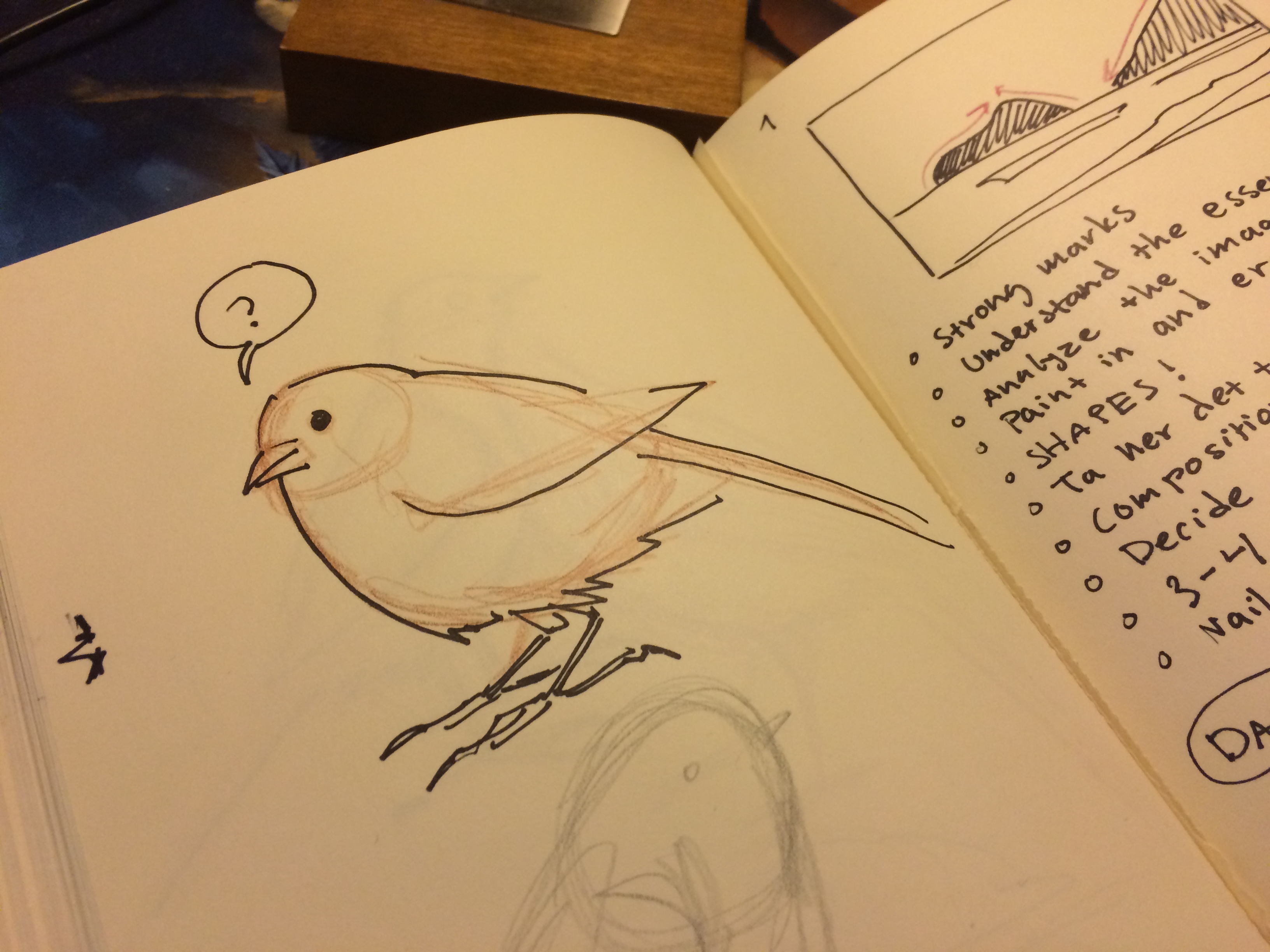 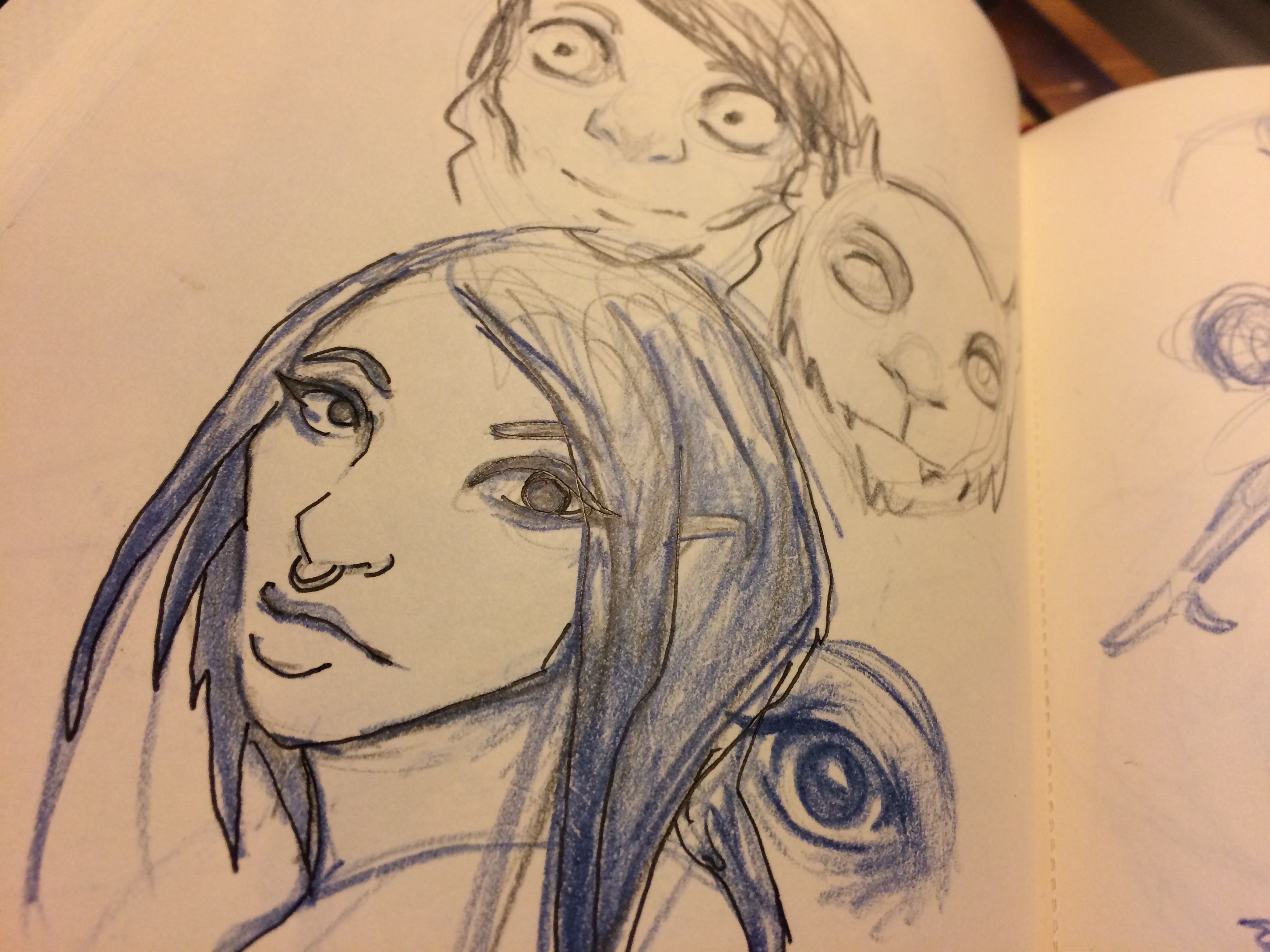 When it comes to my Art Project I feel a bit confused. On one hand I feel like I should do something with my skills…like have a plan for where this is going, but on the other hand I’ve come to learn that the best things in life are often created out of random and coincidents. In August this year it will be three years since I started The Art Project.

I look at the leading concept artists in the games industry and feel that working as an artist with games really isn’t my cup of tea. I honestly don’t enjoy drawing tanks or Star Wars stuffs, I just feel like all I see is beeews and mechs all the time. Nothing wrong with that, but it just doesn’t float my boat. The stuff that gets me excited seems to be landscapes with down to earth, kinda quiet settings. I totally love the art by Simon Stålenhag! I’ve also noticed that I don’t feel so happy while drawing anymore, I feel like it’s all just for the sake of learning some technique or doing a study. I almost feel like I can’t draw for the fun of it right now. Not sure what to do about this. I feel very alone in front of the computer. I can’t sink into my own world while drawing since I miss human interaction too much I guess. One of the drawbacks on starting my own thing has been to not have a stead team to work with everyday. I meet all these cool developers, but I really feel that I need a team for perform my best.

To close this post with something positive 2014 marks the year when I moved to a very nice apartment, I traveled to a lot of countries, celebrated an awesome Midsummer, got to hang out with some of my favorite people in the world and attended a beautiful wedding for some of my best friends. Also, here’s an drawing from 2002 (when I was 14 or 15 year old) I dug up during Christmas when I finally cleaned away all my old stuff from my room at my parent’s place in Finland. A poster for a made up movie. Enjoy! 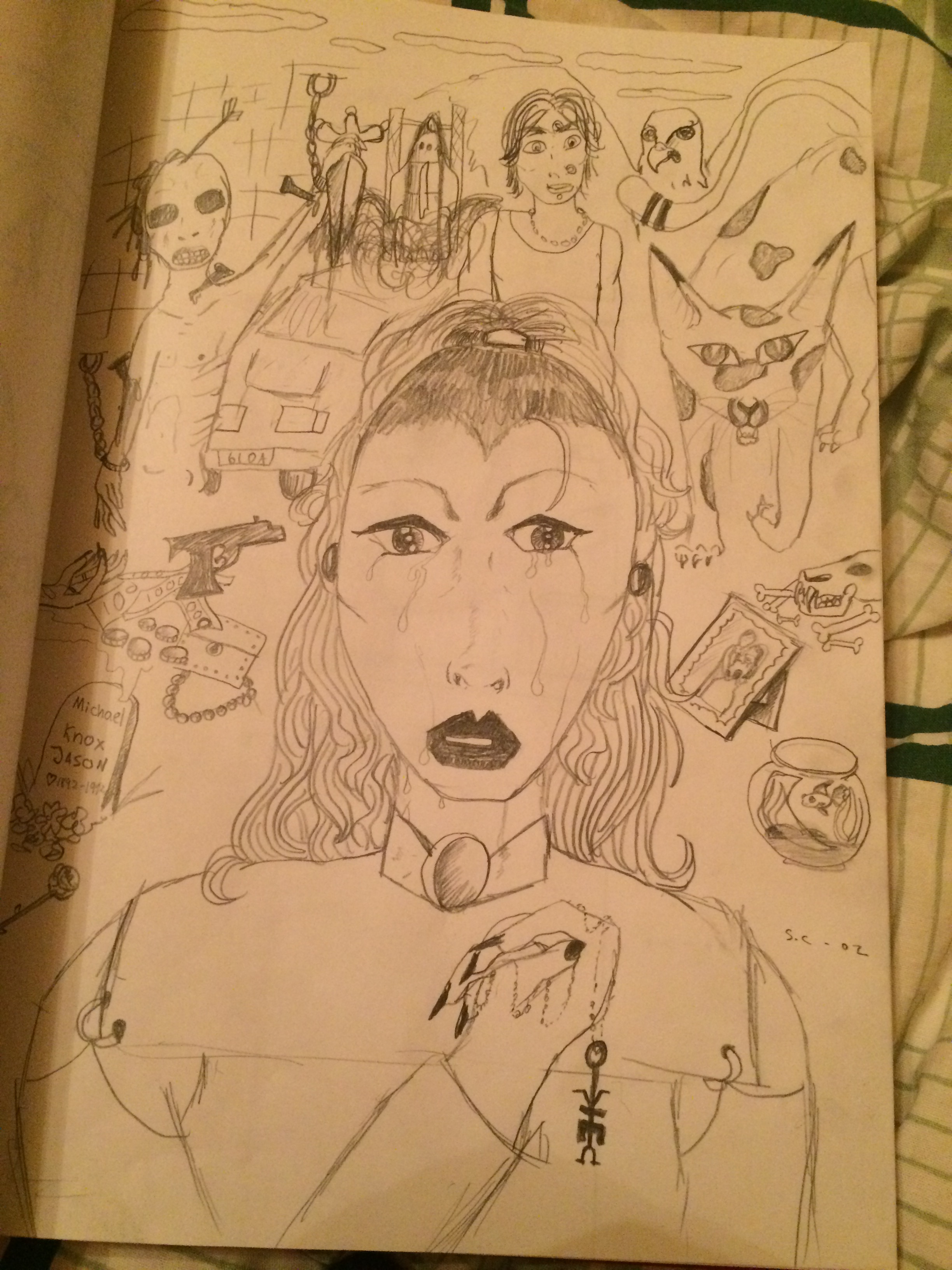