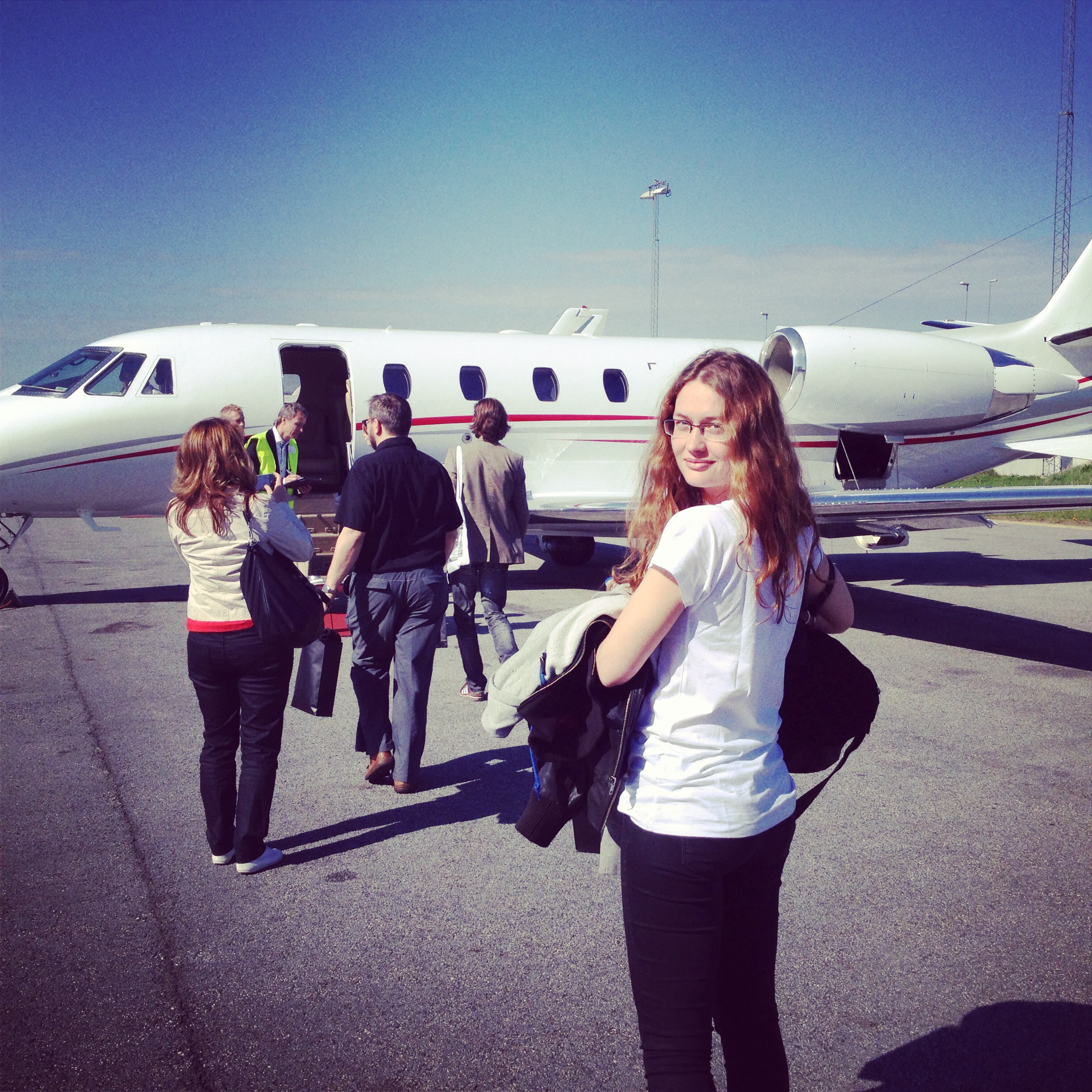 Arrived at the Bromma airport, with no idea about where we are going. Exciting!

So, I went to Monaco this week, together with Mojang, the developers of Minecraft. My friend Johan who is crafting the pocket edition of the game asked me if I wanted to join him for the trip, to celebrate 10 million sold copies of the game. Everyone employed at Mojang could bring a +1, and so I was happy to tag along for this adventure! Me and Johan know each other from back at the Uni when we both studied game development, he as a programmer, and me as a game designer (I might not really work as a designer of games today, but community management and data analyzing is still awesome!).

So this is the full story of what it was like. I can tell you it exceeded all of my wildest dreams, and this is probably a once in a lifetime experience, so buckle up and let me give you the short version!

I arrived to the Mojang office early Monday morning, where we got served breakfast. We then got divided into five different groups (all in all 48 people were booked for this trip). Then we got into white limos that took us to Bromma airport outside Stockholm. I had heard rumors about private jets, but when we finally pulled up to the Bromma VIP airport everyone in the limo were screaming “nooo way?!” 20 minutes later we left Sweden behind, still with no clue about where we were heading! The only thing I knew were that we needed to bring swim suits and might be travelling by horse later on (?). The horses turned out to be a lie, by the way. 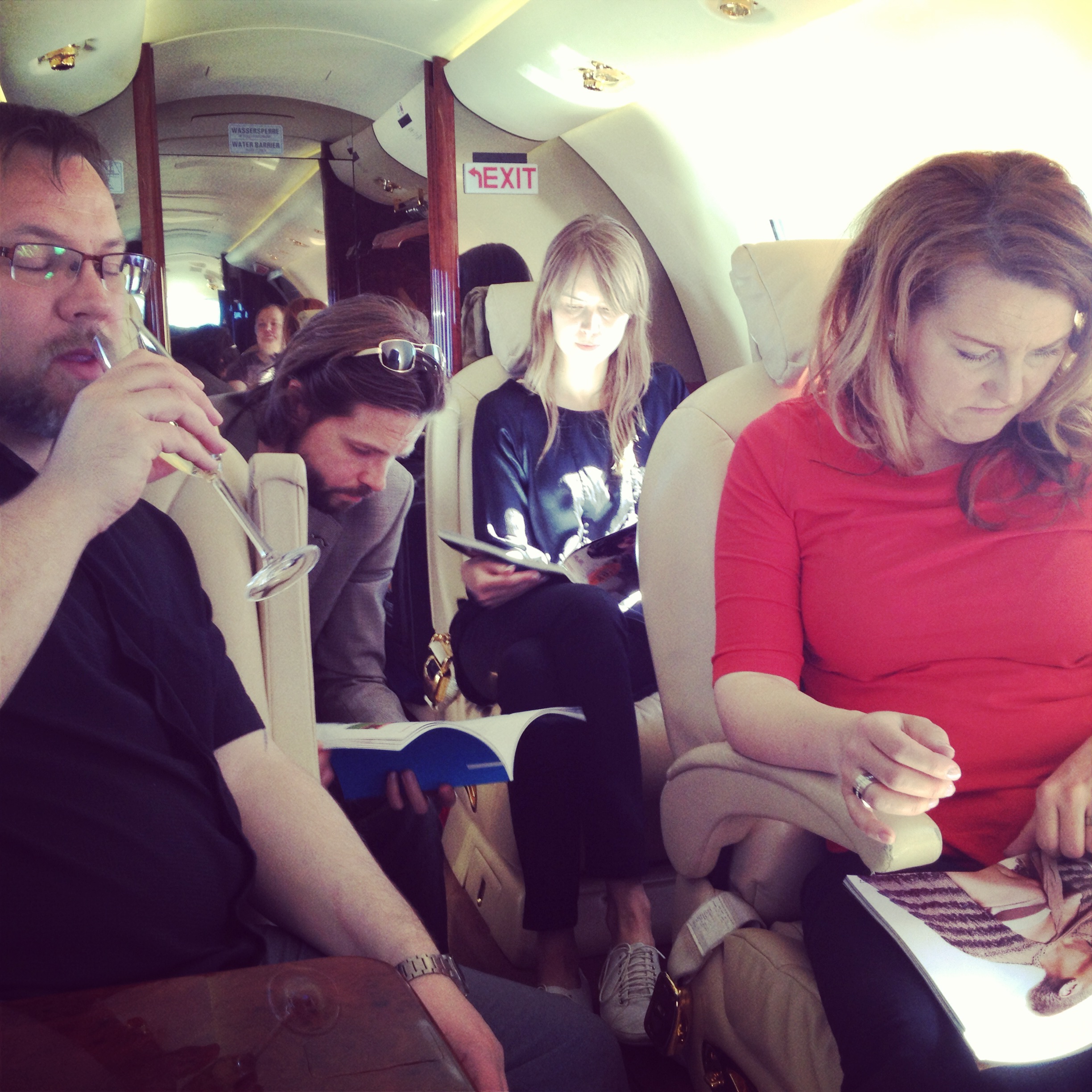 On board one of the five private jets. We had glasses of Brut Champagne and tried to figure out where we were going. 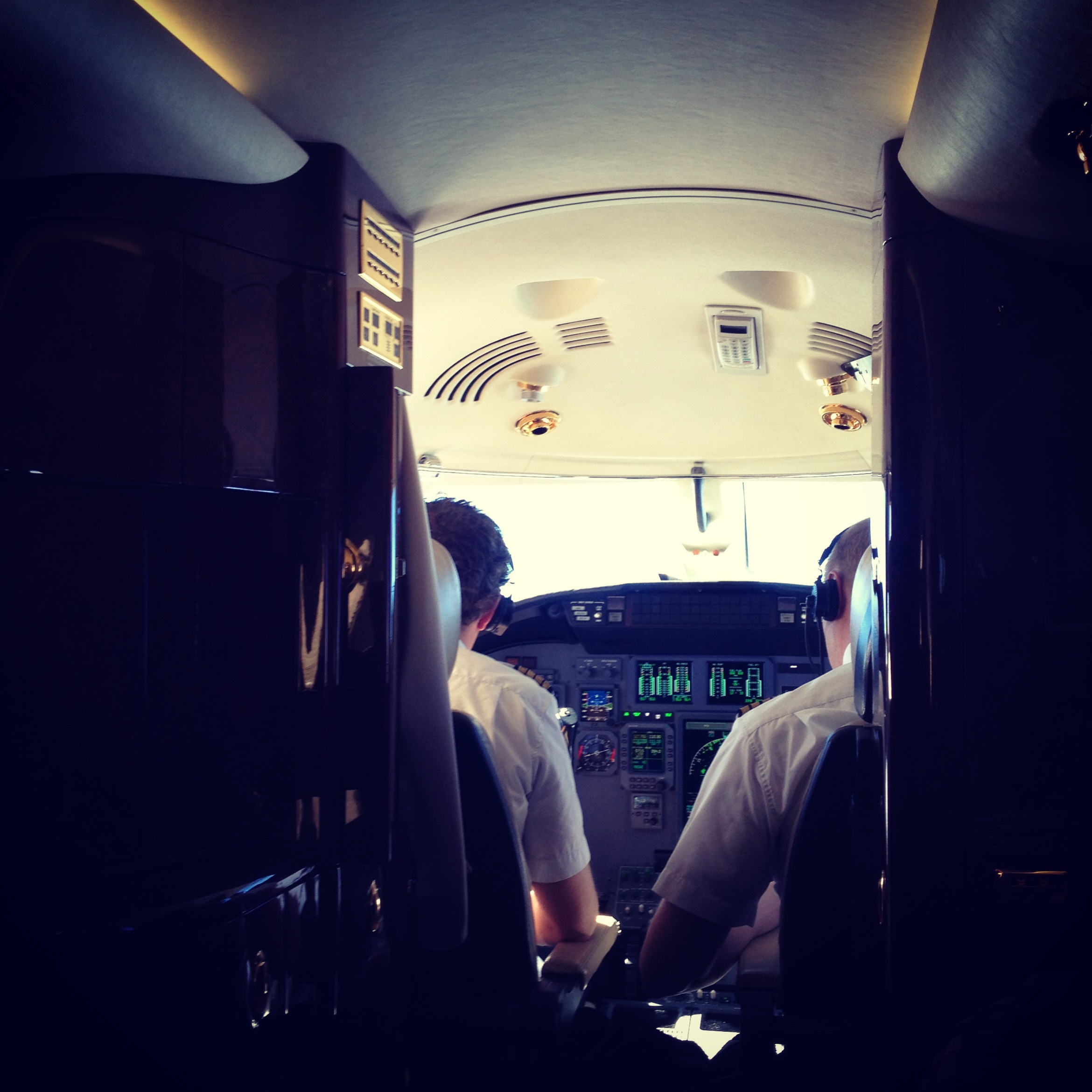 Our pilots were skilled and nice. They smiled and told us the trip would take somewhere between “30 minutes and 5 hours”. We tried to guess where we were heading based on time and iPhone compass. We guessed Nice, France, and since we landed in Cannes, France, I must say the guess was pretty good, ey? 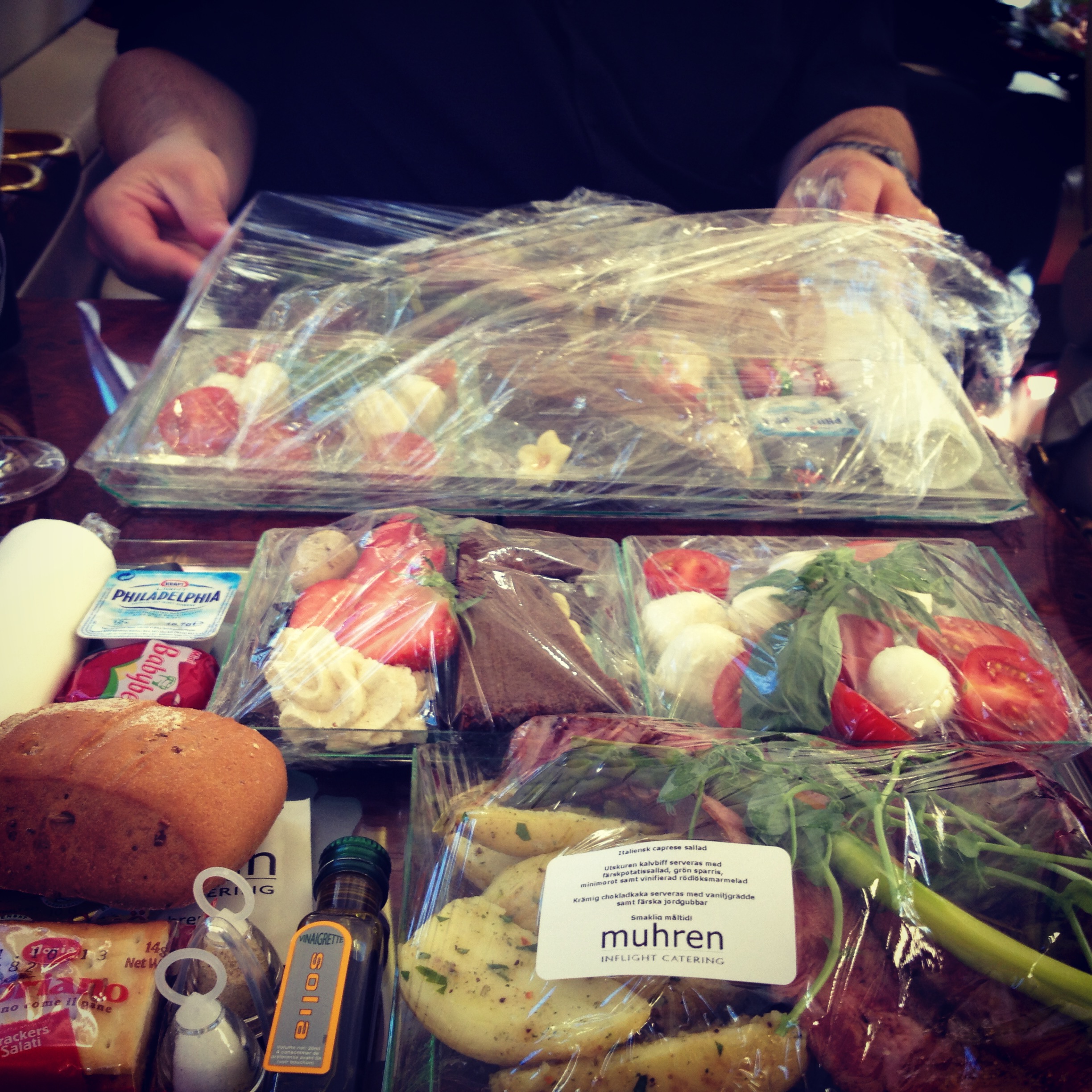 The food on board the plane! This awesome food made it easy to endure the fact I’m scared of flying : 3

The plane could carry up to eight passengers and two pilots, and pretty soon Mojang’s Patrick took on the role of being a steward, which we found to be quite fun! He did an excellent job haha! After 3 hours we landed on a private air port in Cannes, France. Both the takeoff and landing went super smooth, it was nothing like the bumpy experiences you have when riding massive Boenings : O I like it! 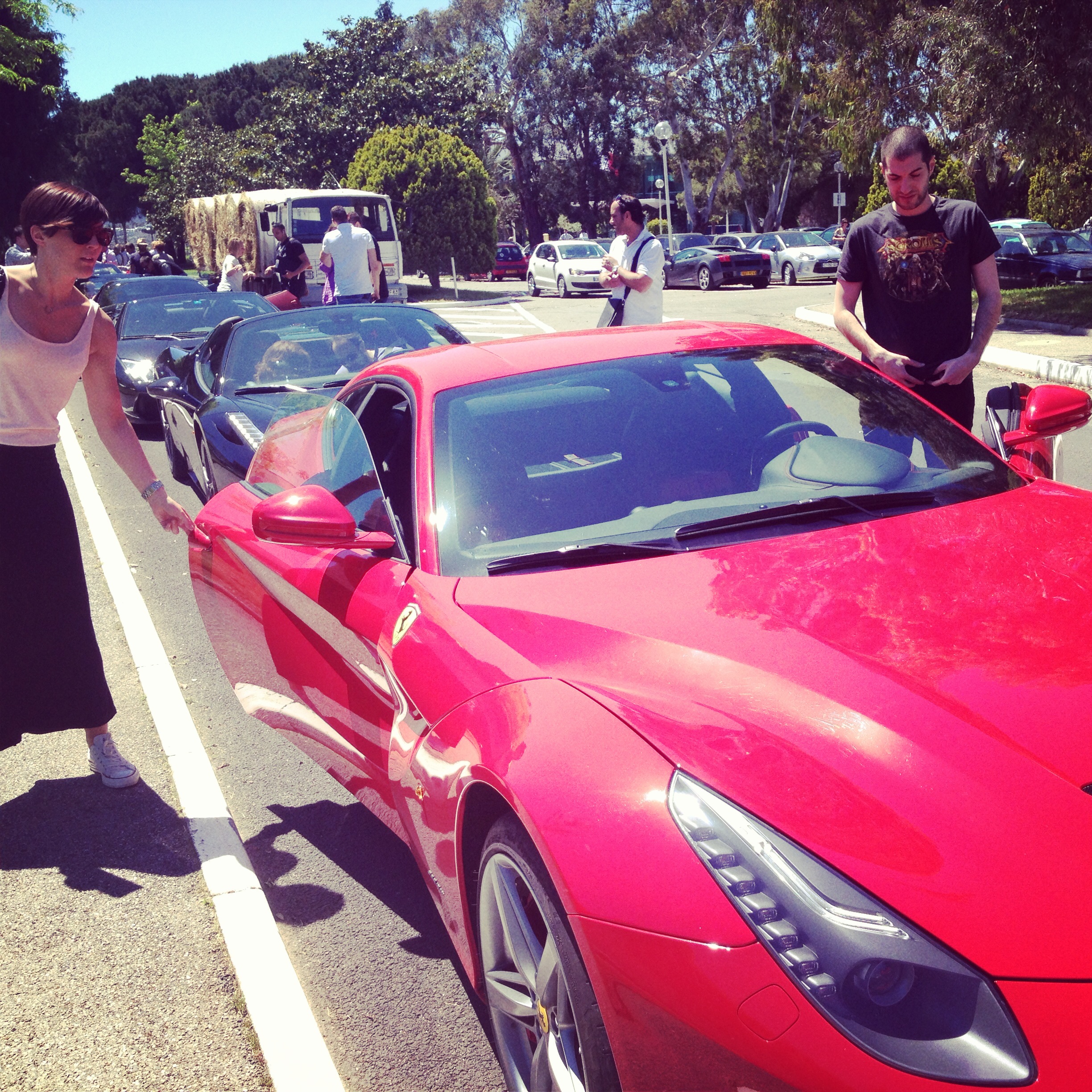 Kappishe choosing his ride to Monaco. I love the old truck in the background, haha!

The event personnel from Eventosaurus(who followed us around for the whole trip) asked us to line up outside the air port. After all we were going to Monaco’s Monte Carlo, and we needed to arrive in style, they told us. So as we stood there waiting three limos and 16 super luxurious sports cars came cruising around the corner! Everyone who had a licence and wanted to, got to pick a car! There were Ferrais/Lamborghini/Bentleys and more! Me and Johan jumped into a white limo (I’ve left my license home that morning) and off we went to Monaco!

People along the way took photos of us as we traveled through some coast towns. I mean, they probably believed us to some kind of famous people, riding in a caravan of three limos and 16 sports cars. I even waved to some of them and they started screaming and taking photos haha! Feeling like such a douche… 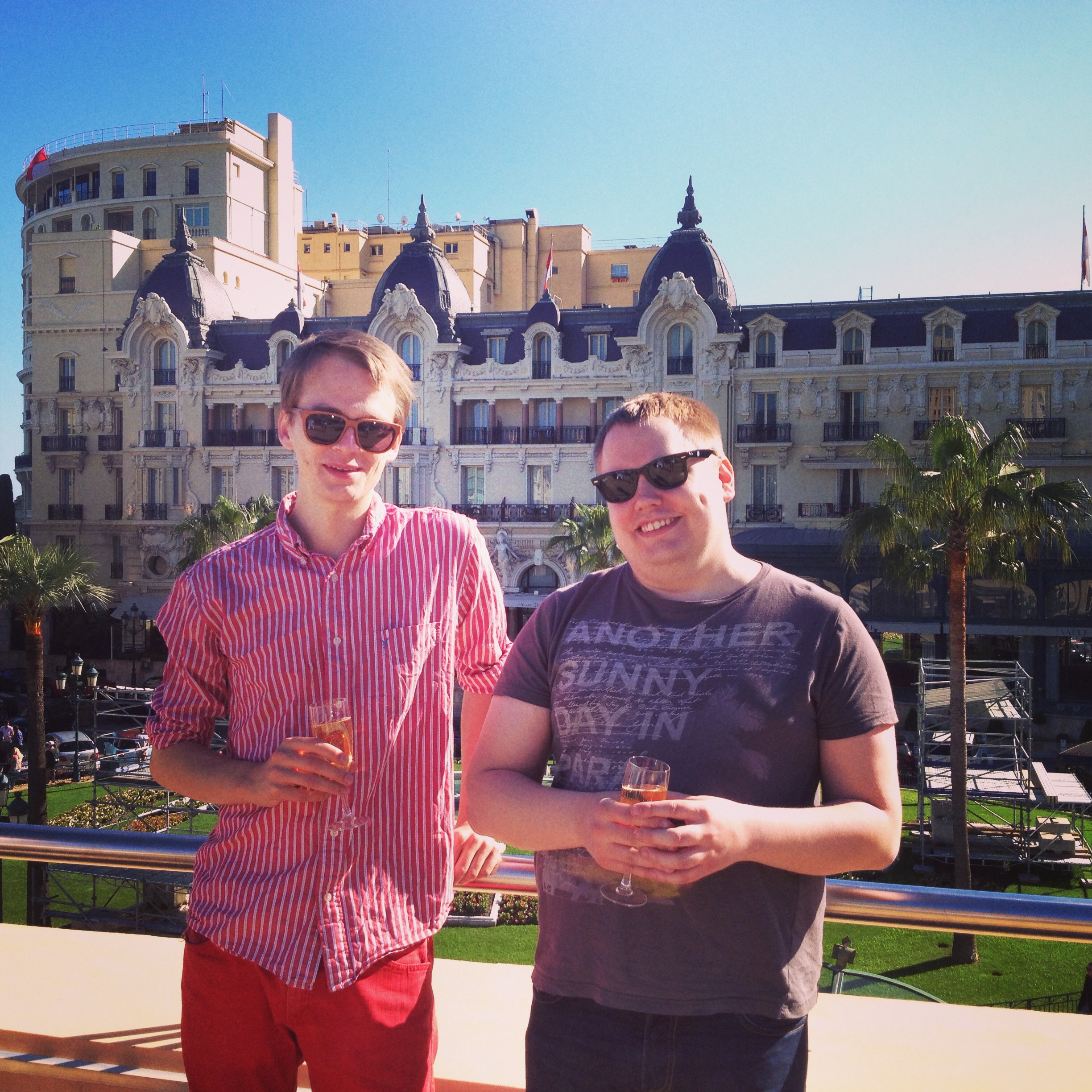 Mojangstas Möllstam and Johan in front of our five start hotel Hotel d´Paris in central Monaco.

When everyone had arrived to the five star hotel we changed clothes and had some ice-cream and Champagne on a balcony outside the hotel. After people were done eating and drinking we headed to a restaurant, traveling with a funny and totally charming mini-train to get some sightseeing! 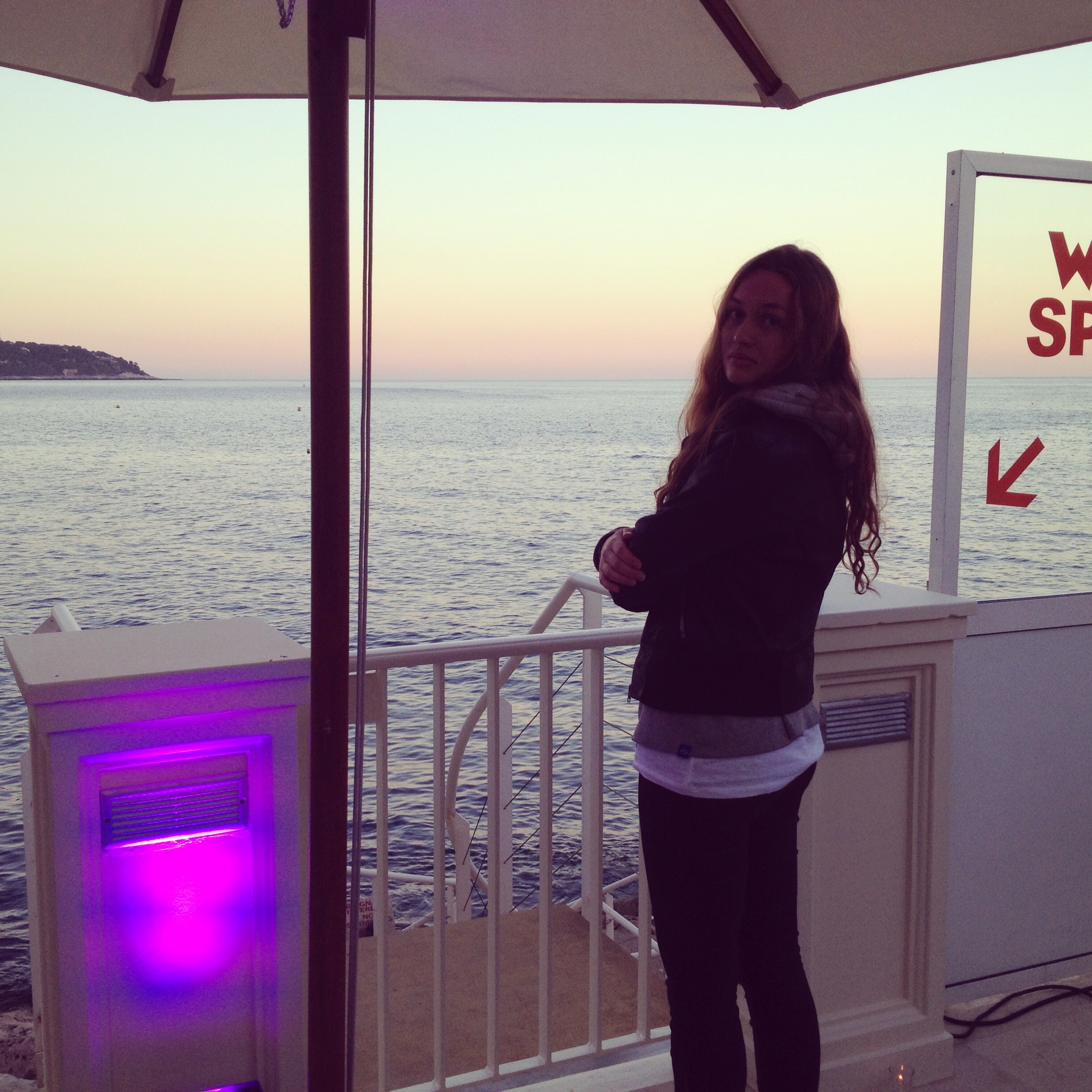 The Mediterranean Sea! It was so nice to feel the salty breeze. 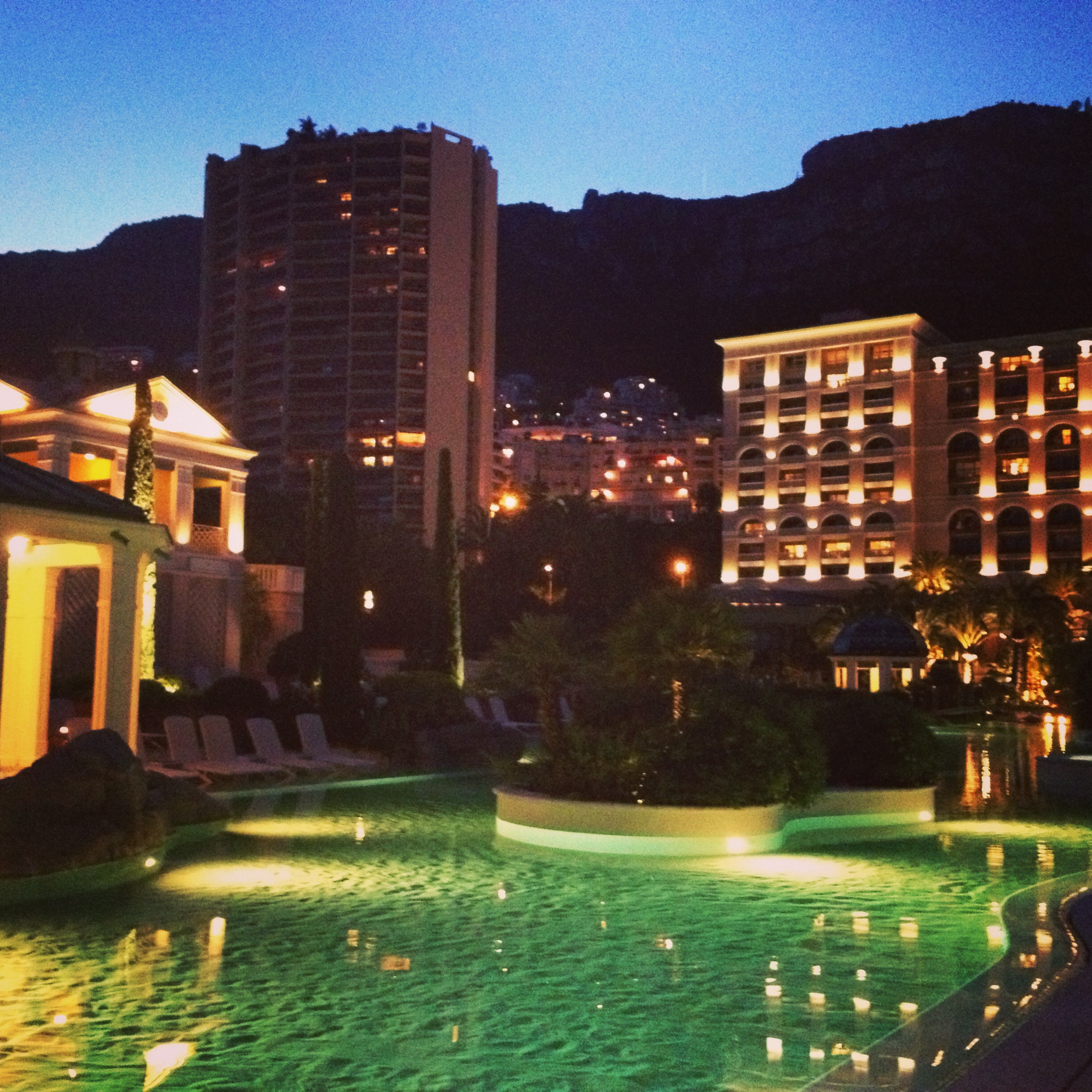 The hotel by the sea, where we had dinner. I’ve never seen a pool with this kind of floor : O 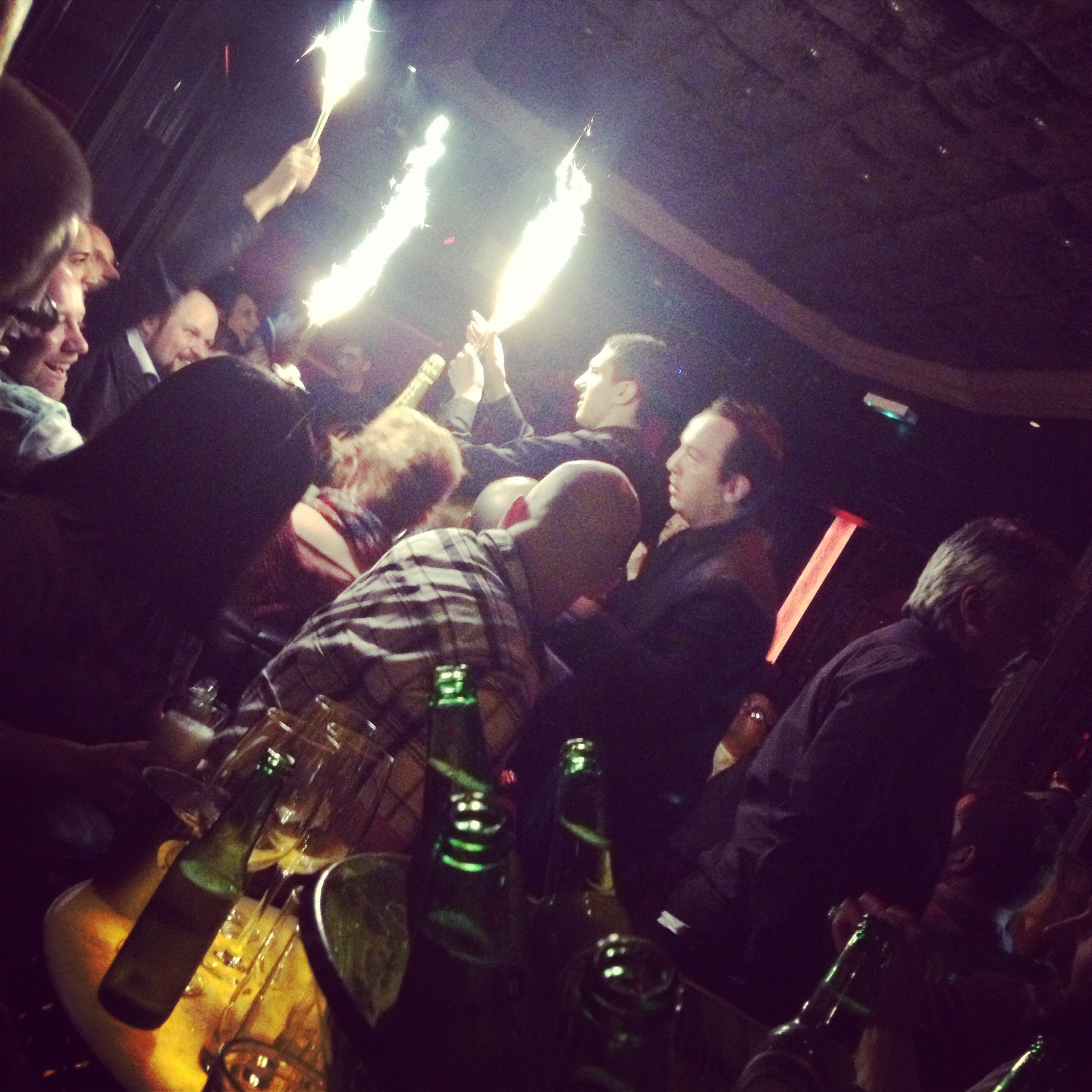 After the dinner we went to a night club featuring live music.  Champagne was offered to everyone, one bottle was as big as a small pony. The night ended with us dancing on the chairs! 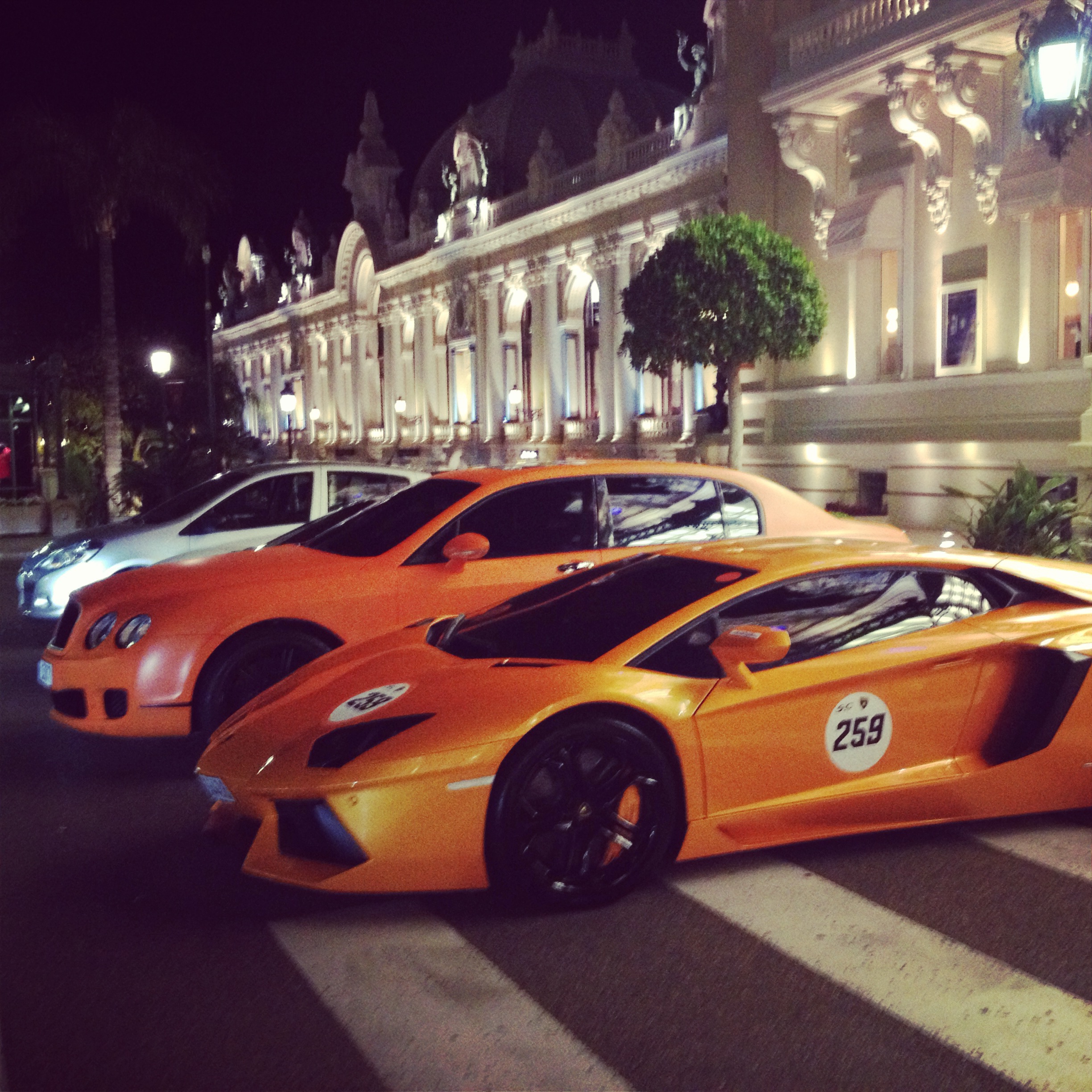 Monte Carlo by night, outside the casino!

Me and Johan got to bed at 02 that night, and I feel asleep right away, dead tired. The next day we had breakfast with some of the other Mojangstas, looking over the blue blue sea. Then we grabbed some limos and drove to the restaurant La Chèvre d’Or. I’ve heard later on they have two Michelin stars, but frankly they forgot I ordered a cup of tea, which is not really what you expect if the place got two of them stars. 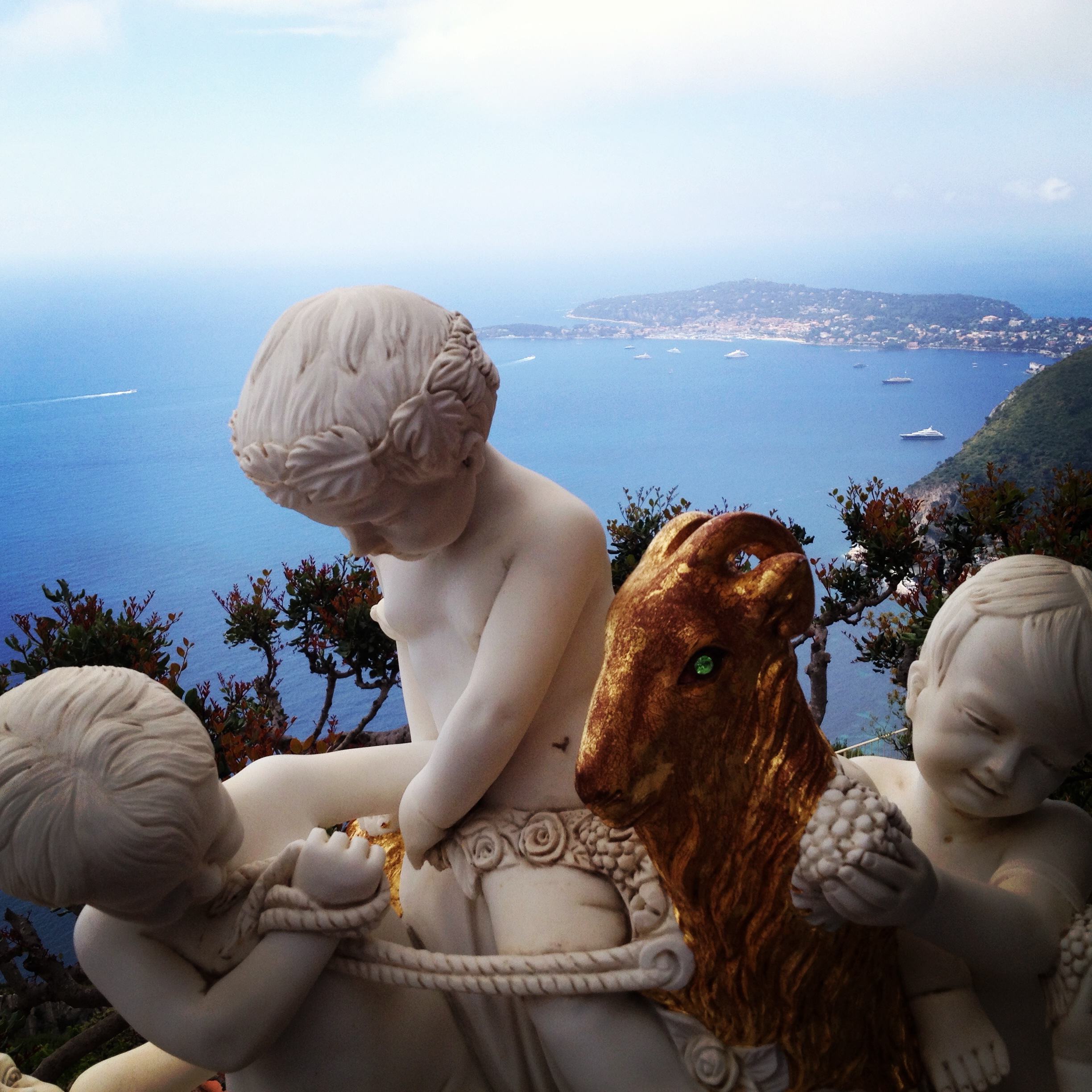 At the restaurant. Don’t ask me what’s going on with the children and the goat… 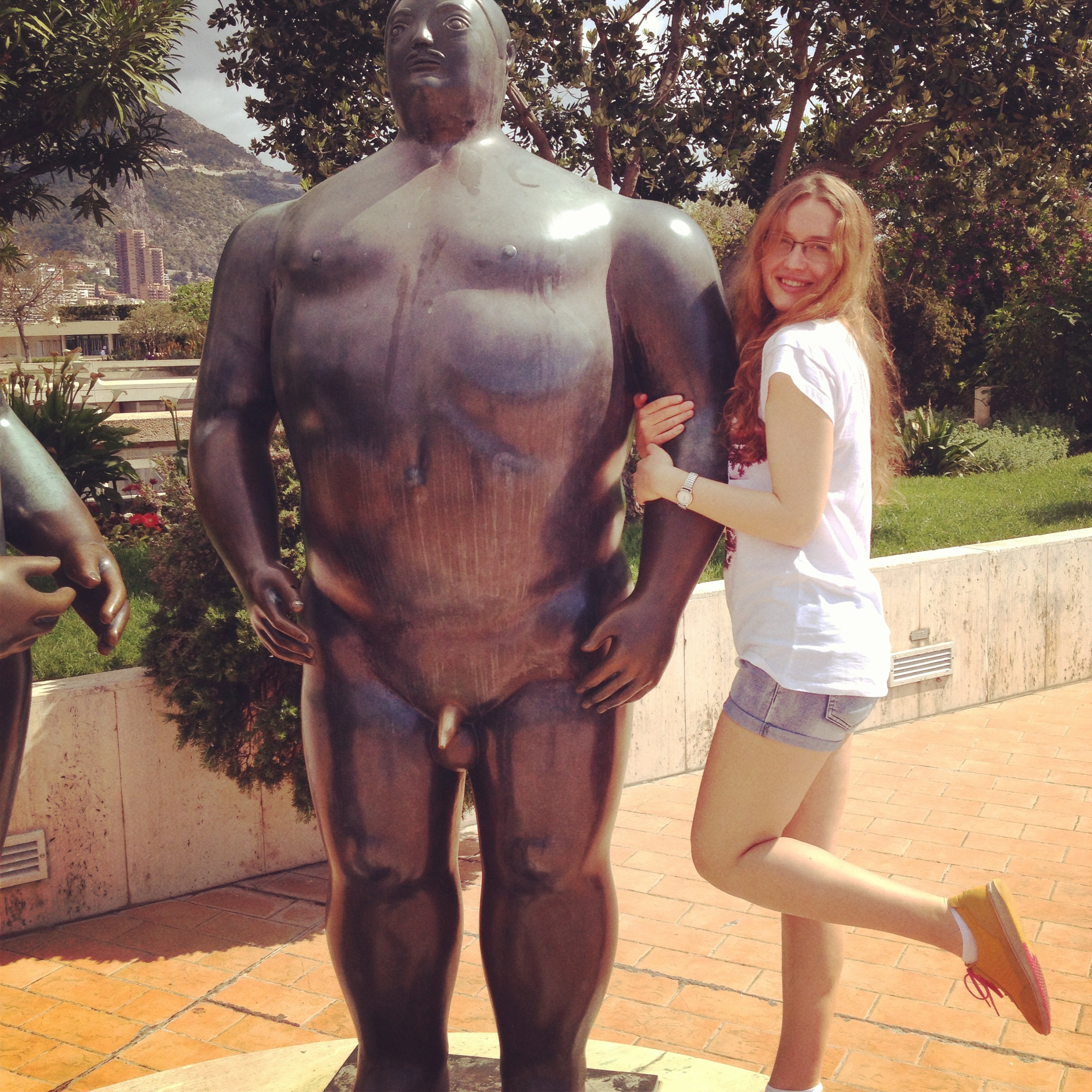 Found the most uncanny statue that day. Please notice what part of statue that is still looking new and shiny… 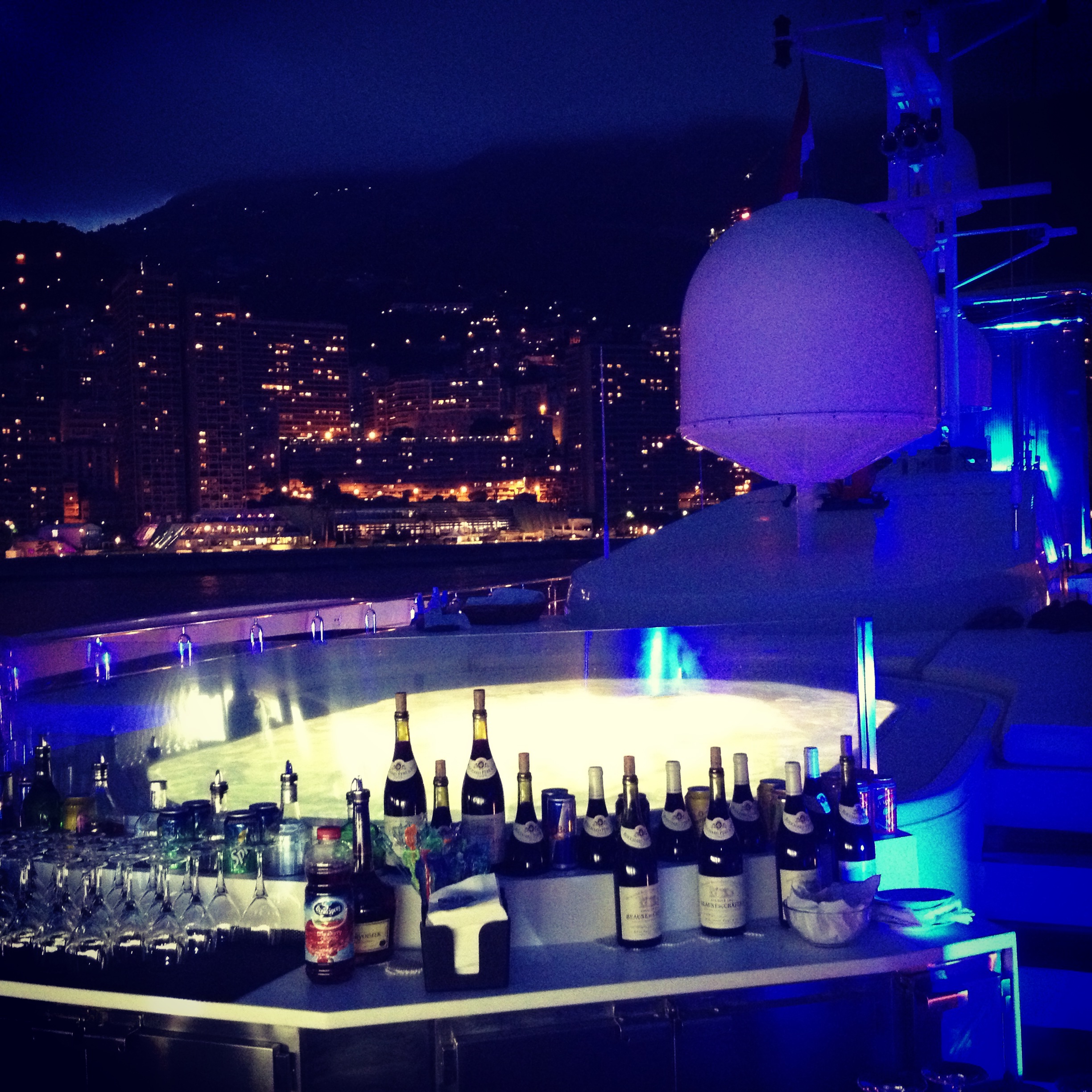 We spent the rest of the day on board a three floor yacht. I totally went into the pool with a glass of Champagne, cruzing the French riviera. The feeling when we realized the boat was moving was just crazy. And we listened to “I’m On A Boat”! 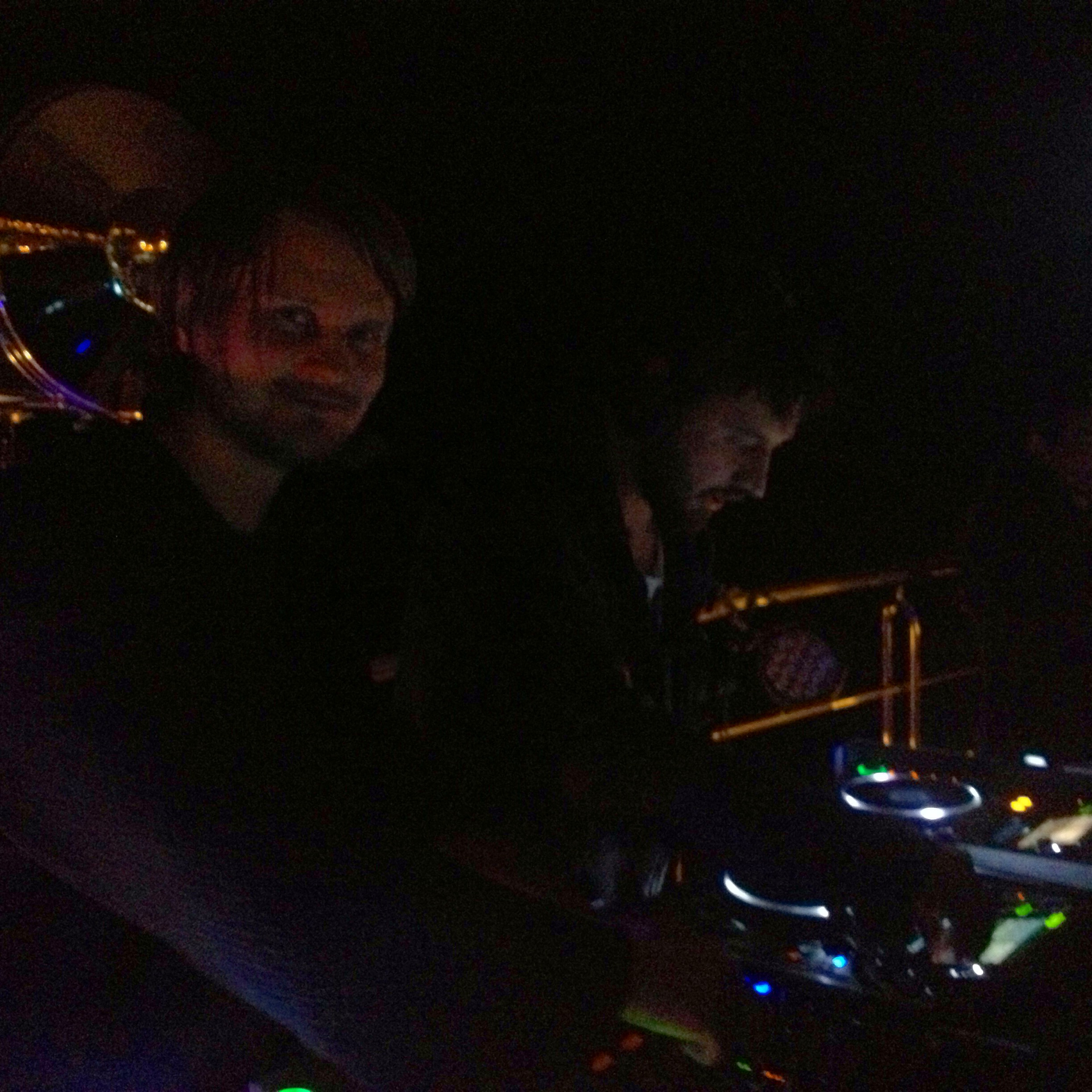 Röyksopp were hired as DJs! When we had finished eating dinner, diving and riding jet skis Mojang’s VD Carl announced the Norwegian duo were to play for us the whole night!! I’m a huge fan and actually I had Röyksopp on my iPhone as lock screen the same day, haha! I got to talk to the guys, shake hands and they told me the liked how I kept the party dancing going! A while ago I tweeted something like “I wish I could party with Röyksopp some day”. Well, dreams do come true! I still can’t believe they were actually aboard, sleeping the whole day we were cruising! We dance barefoot the whole night, on board the boat, in Monte Carlo’s harbor. Such an unreal experience! 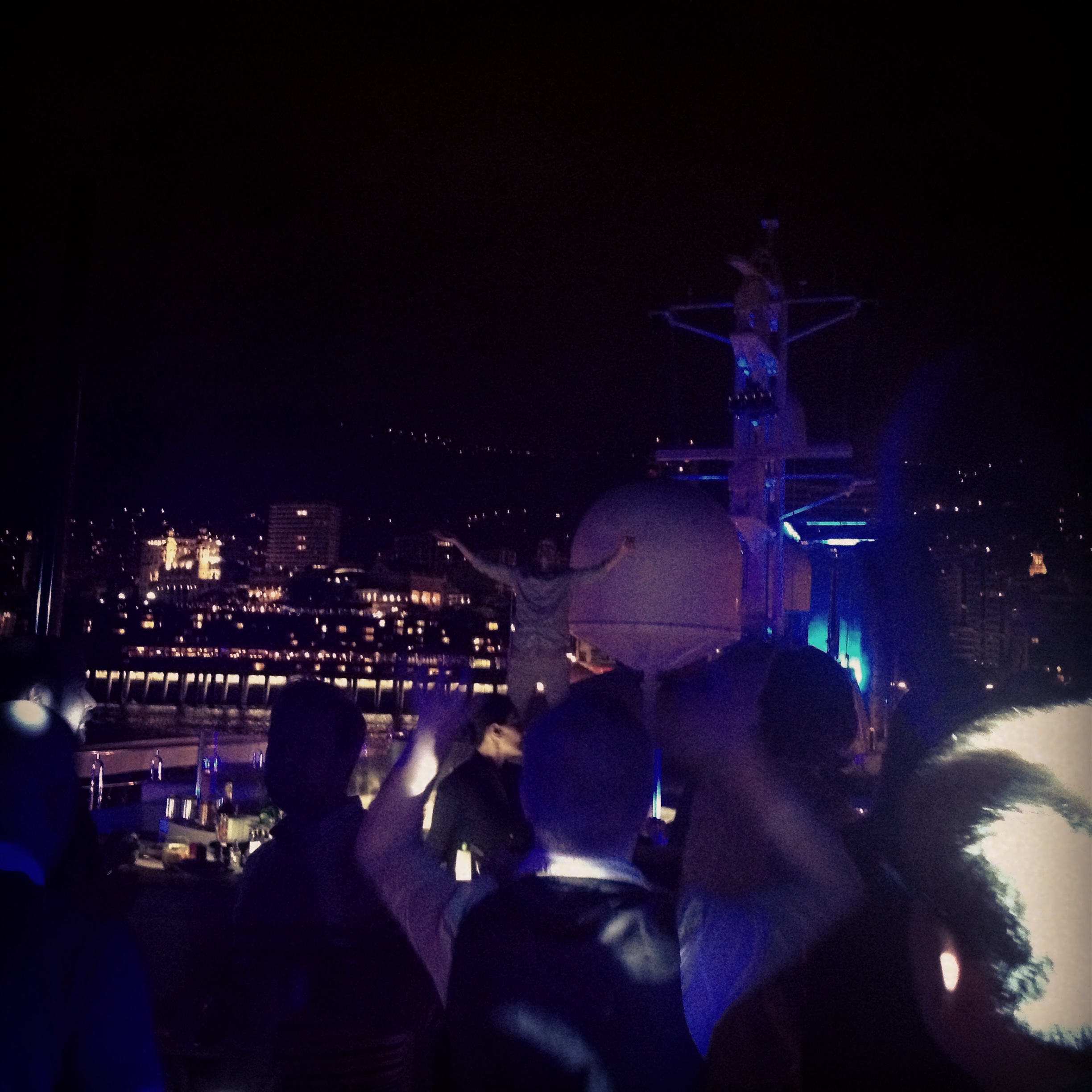 Mojang’s VD Carl Manneh cheering for the party goers! People jumped into the pool and sprayed Champagne on each other. Crazy! 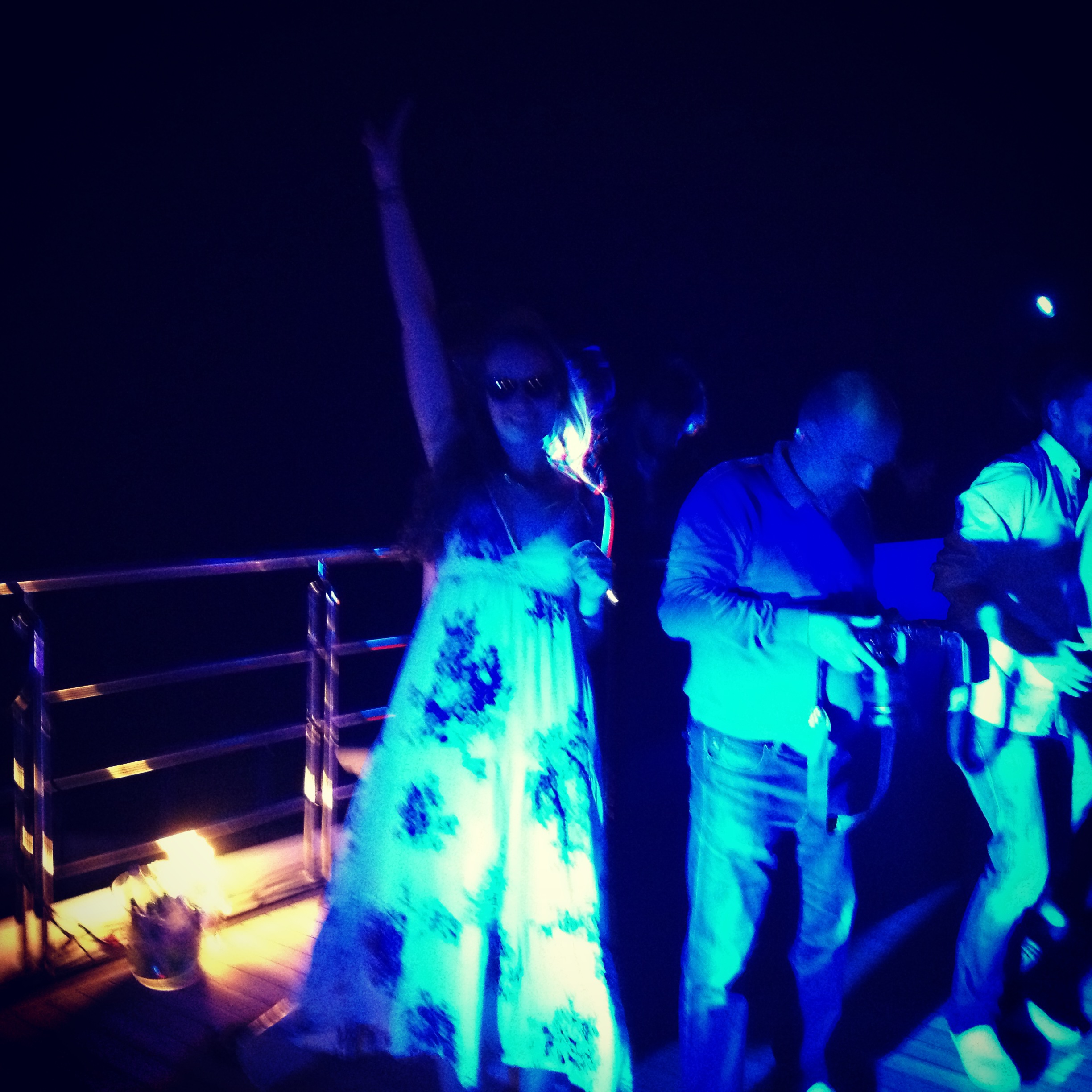 Time to party! I wore the Ray Bans all guest got the first day, at every party, like a true rock star lol. People danced like crazy and when the waves rocked the boat everyone fell from one side to another, screaming and laughing. I can’t believe I didn’t got sea-sick!

I feel asleep so happy that night. Everything was just so unreal. This trip got wilder and more crazy for each thing we did. The best part was that no one knew what was waiting around the next corner, just that things were fucking crazy. 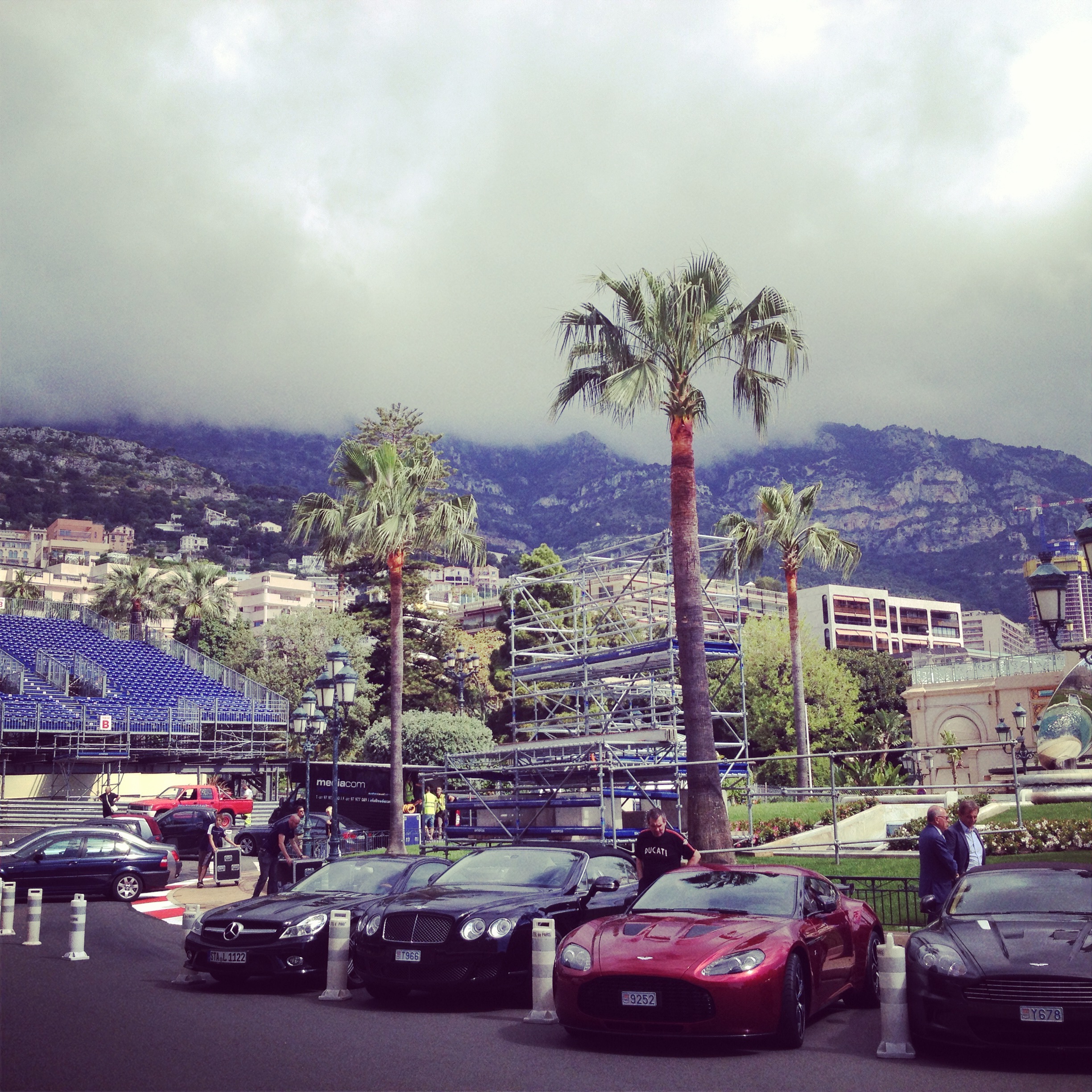 Outside the hotel. The whole city is being transformed to a F1 racing track for next week’s Grand Prix! We packed our stuff on Wednesday morning and checked out from the hotel. Taxis took us down town to the harbor. 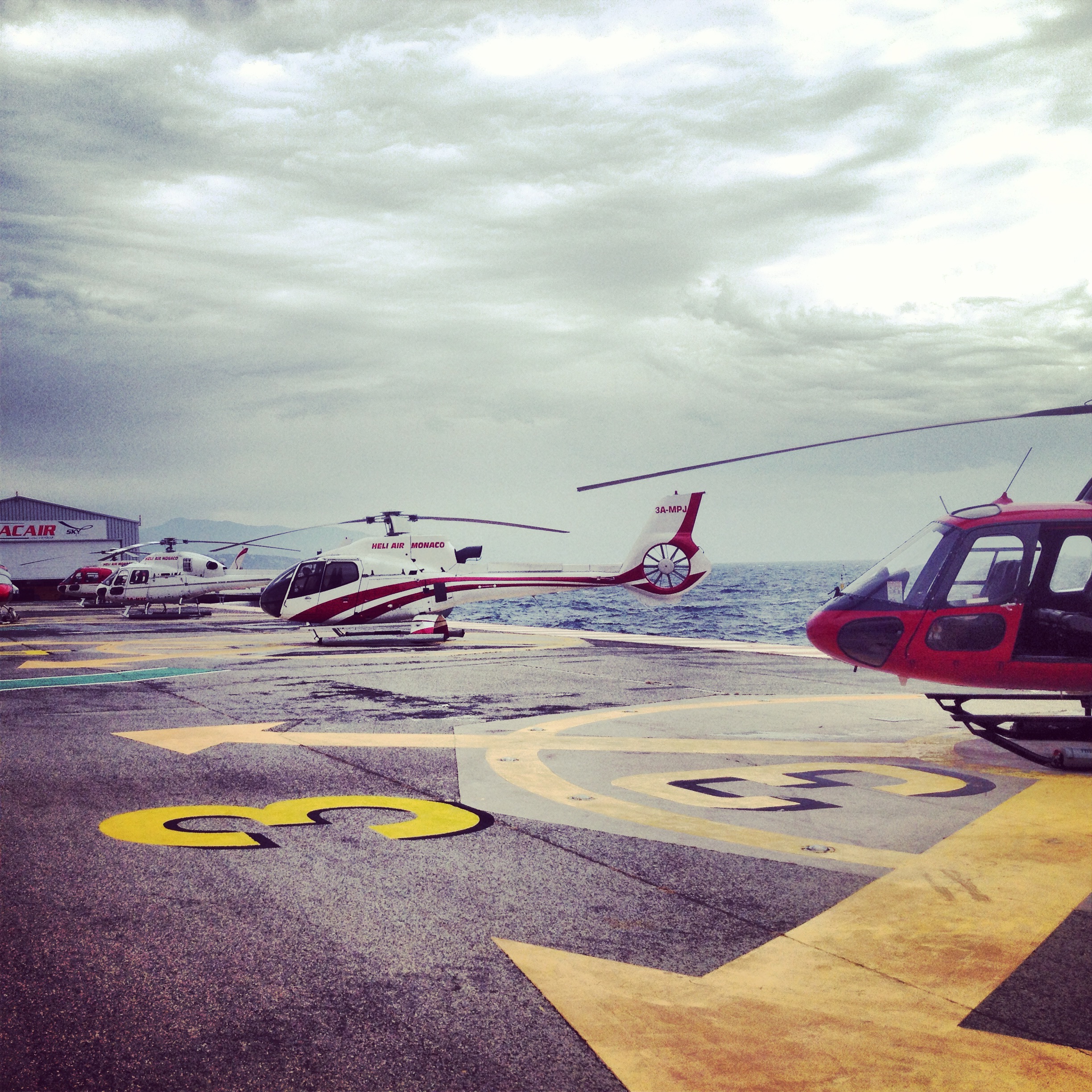 Helicopters! We got to fly helicopters! I was really nervous, but everything went just fine. 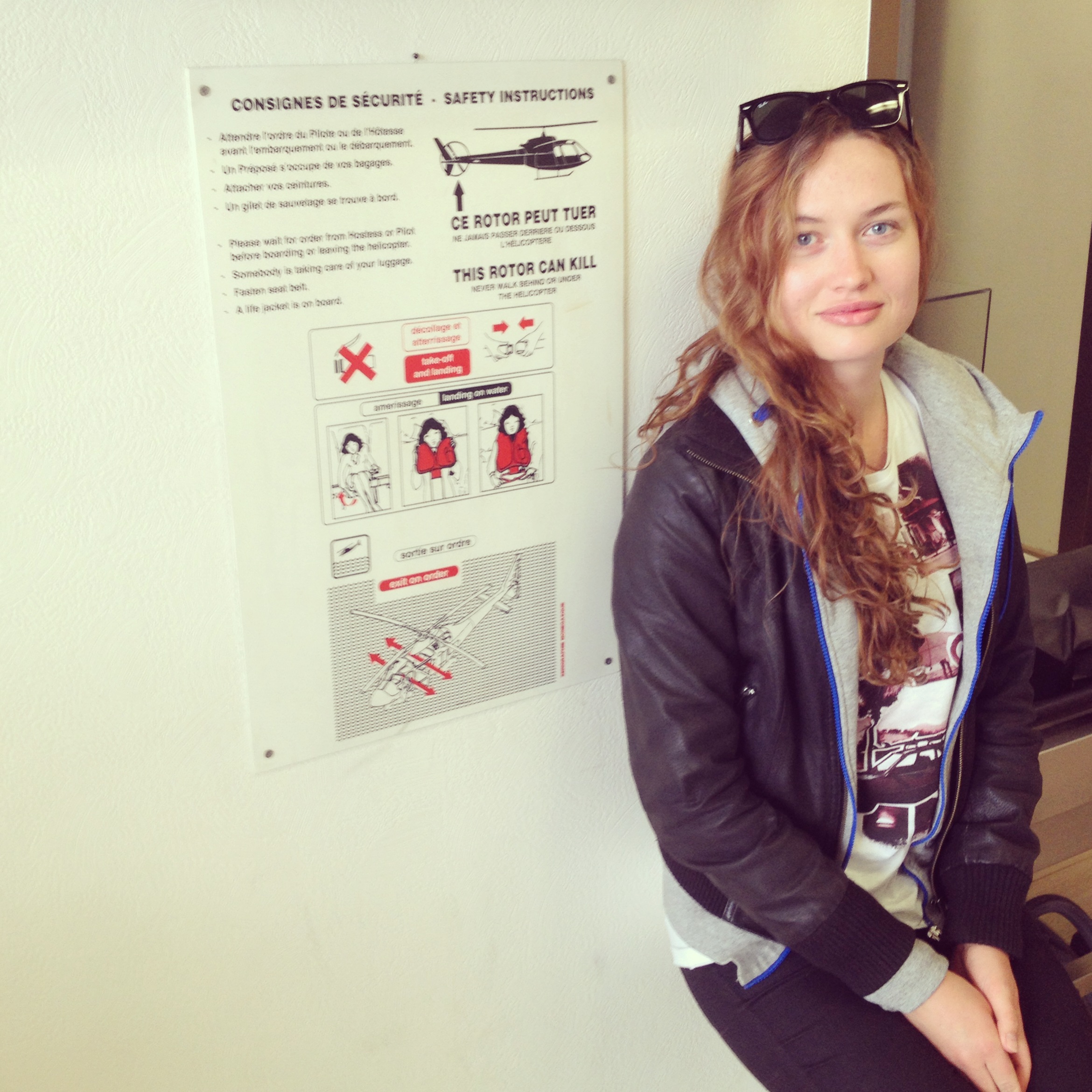 Me and some security instructions for helicopters. I was super scared when Johan snapped this picture. I don’t like flying, but I gotta say the feeling when the heli left the pad was so awesome! I even forgot to be scared! 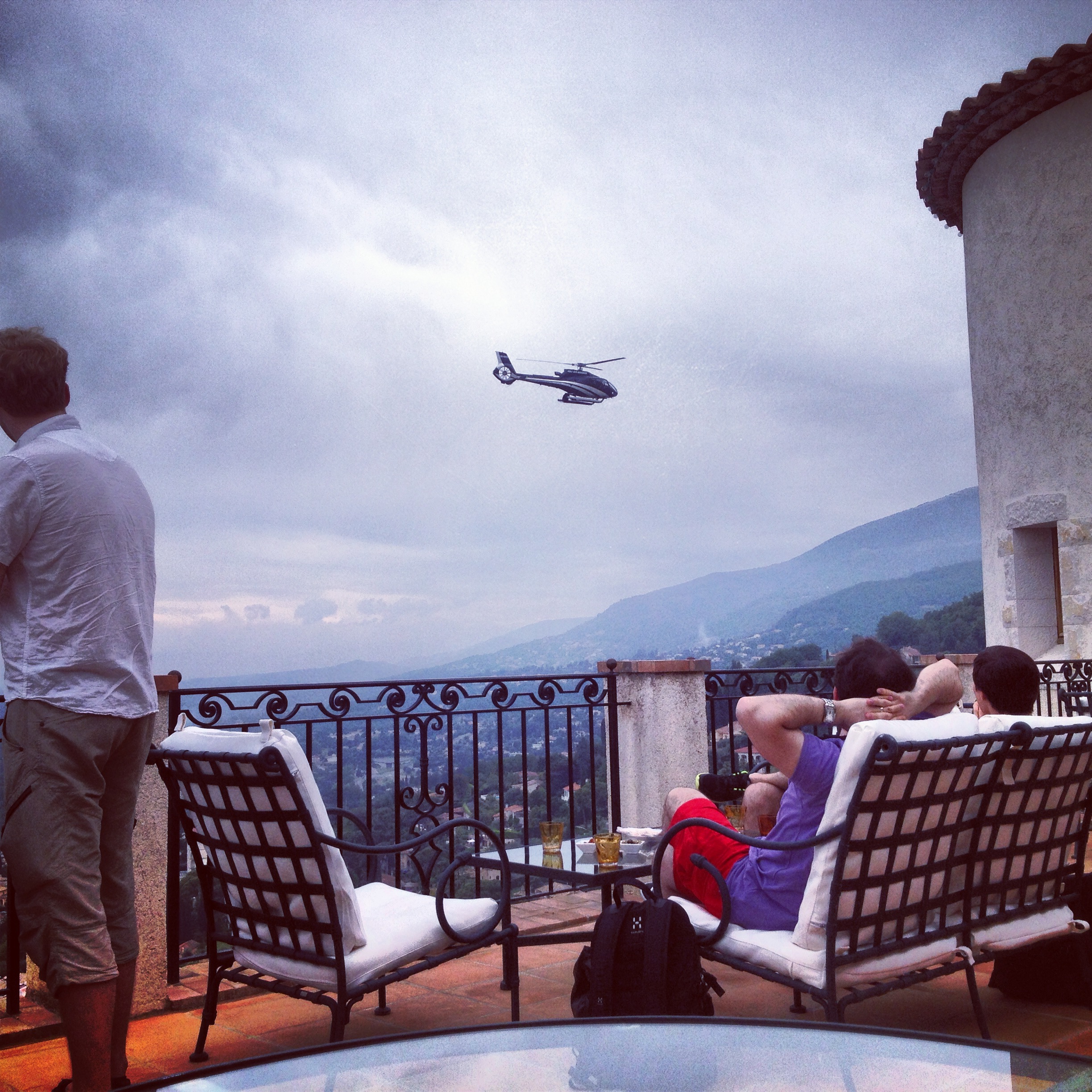 We went to a castle in France to have hangover burgers lol. Does it get more crazy?! The Mojang crew waiting for everyone to arrive for lunch. 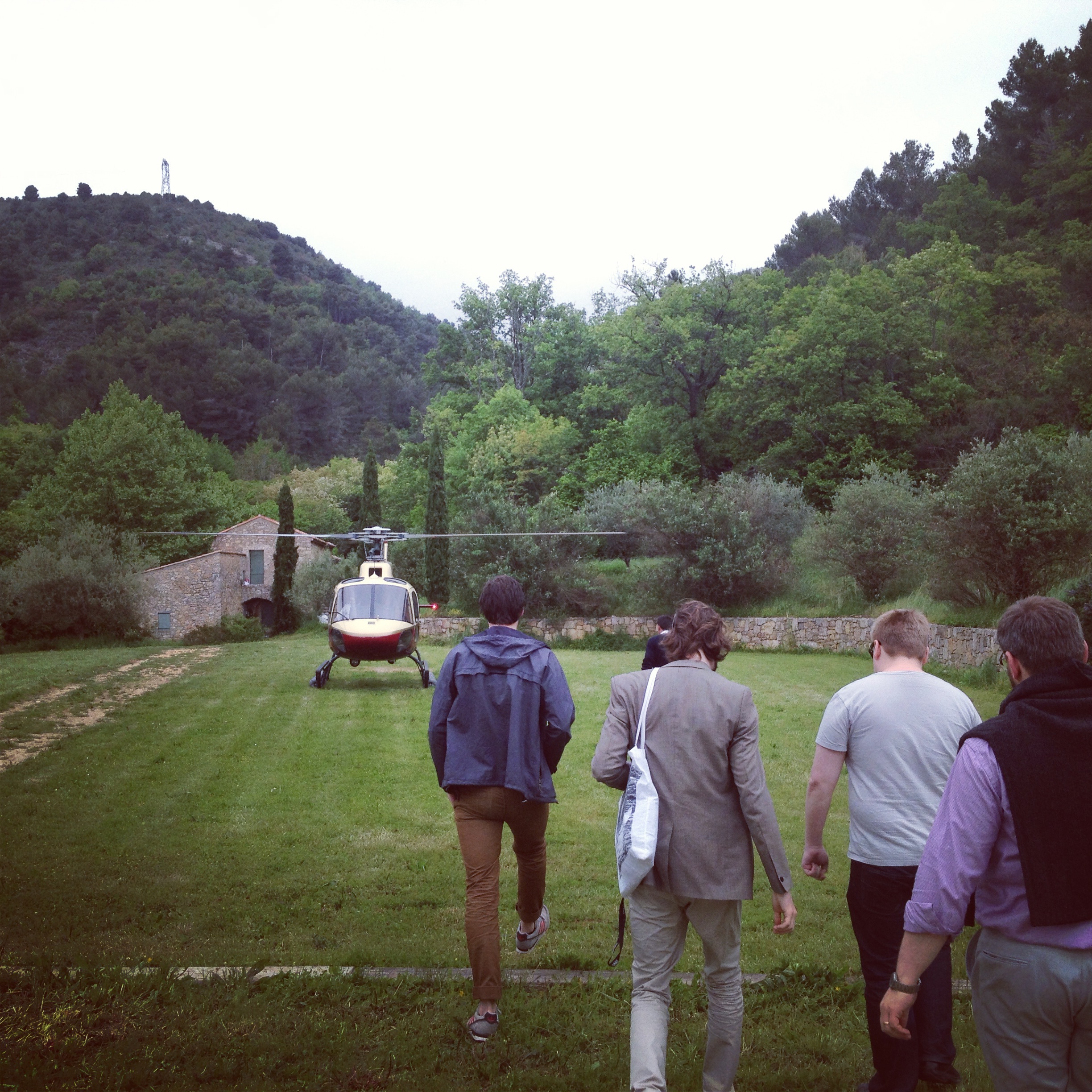 After the lunch we said goodbye and we got flown to the same VIP airport in Cannes where we had arrived two days earlier. 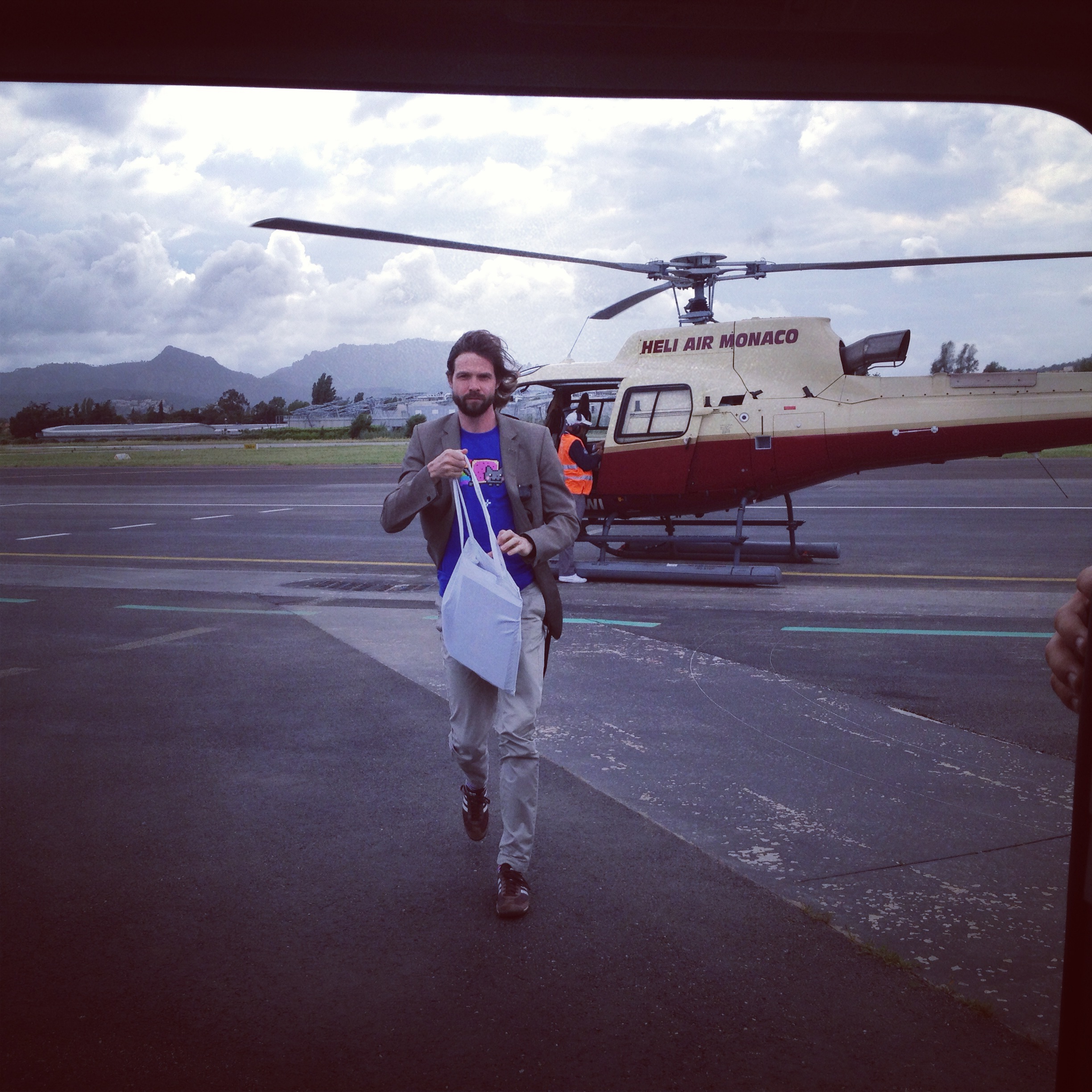 Patrick getting out of the fancy ride. Heading home to Sweden on Wednesday afternoon. The private jets had been waiting for us the whole time in Cannes, and when we touched ground in Sweden we got prepaid cabs to drive us home.

I don’t really know what more to say, I’m sorta out of words for this whole experience. Thank you Mojang for the trip of a lifetime! It was awesome to meet Röyksopp, to ride helicopter and to visit Monaco.

I think my first week as unemployed went pretty well : )

One thought on “Going To Monaco With Mojang!”