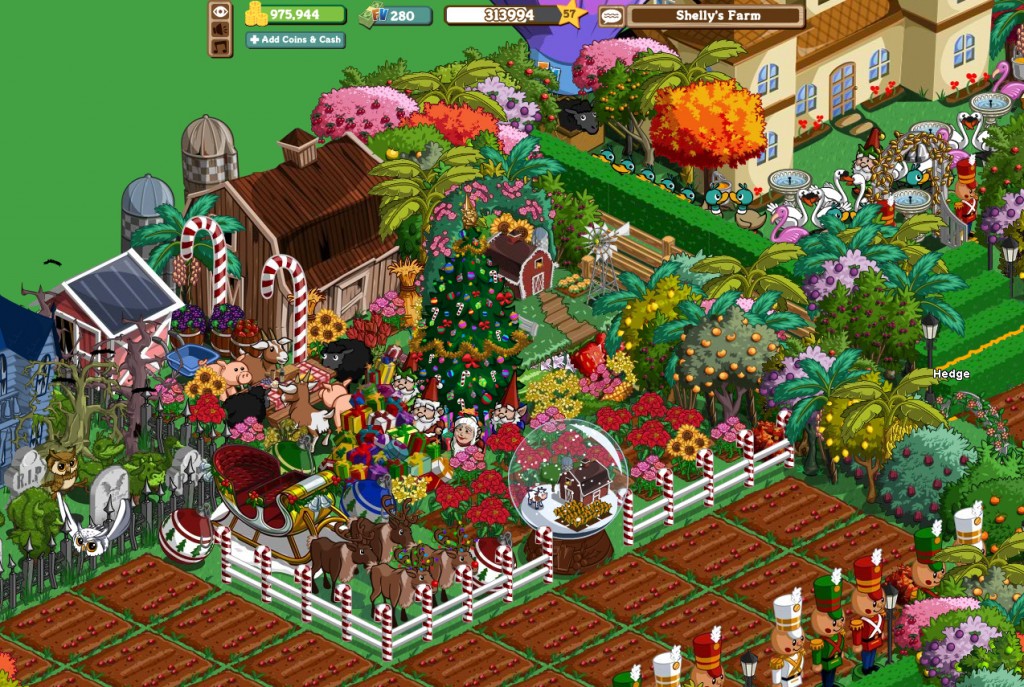 Let’s talk about games and the value they add to people’s life in unexpected ways.

In the beginning there was “Farmville“. Farmville is a game where you play as a farmer (wow really?!) taking care of your own virtual farm. You plow land, harvest crops and raise animals. If you feel like it you can start your own bakery or collect rare farm-themed items or trees. Farmville was a huge hit on Facebook back in 2010. When the game peaked it had over 80 million monthly active users, and almost everyone on Facebook had at least one friend posting those annoying notices asking you to help them out with their farm. Farmville opened up a new opportunity, and suddenly everyone in the gaming business talked about how gaming on Facebook was the new, brave future! If you attended any game conference during this time almost all the talks were about Facebook, Farmville and social gaming boom. Game developers seemed to be both inspired by Farmville’s success, but also mocked Zynga (the company behind the game) for not making “real games”. Many saw them as evil business suits just trying to trick their players into spending as much money as possible, only delivering a very poor gaming experiencing as return. Many “real gamers” hated Farmville and the kind of games Zynga produced. They deemed them as “soulless” and sneeringly said that only people who did not know any better would choose to play a game like Farmville, only because those poor players did not know about “real” games like the Zelda-games or Final Fantasy or something else a bit more sophisticated. How could a “simple” game like “Farmvill” bring something good or interesting into the life of its players? 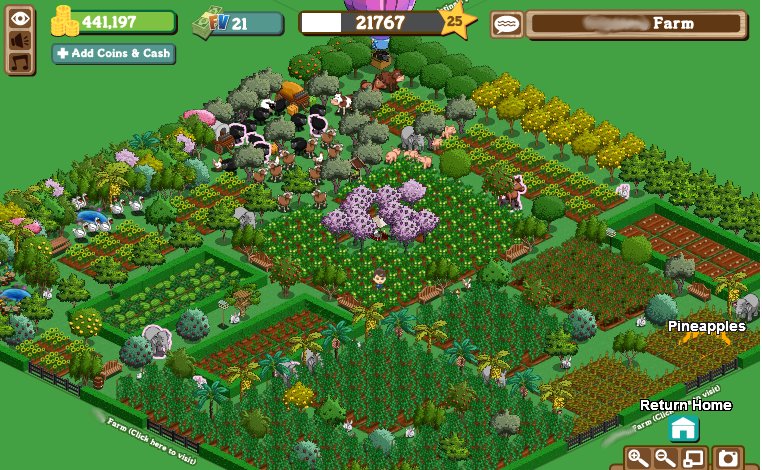 Players are free to arrange and re-arrange the objects and crops on their farms. Inviting your friends to play the game may make your farm bigger and better. That’s one explanation to how Farmville became so popular; the players were doing the marketing for the game.

Last week I had dinner with my two friends Anna and Emma when suddenly Anna pulled out her phone and showed me a game she was playing. It’s called “Hay Day“. She had been playing it for a couple of weeks, and was totally addicted (her own words). My other friend at out table pulled out her phone and she too was totally into this game! They wanted to talk with me about the game, because they know I make games for a living, and I was very happy to talk games with my friends! These two women are not what you would consider “gamers” and they both express worries when their boyfriends spend too much time playing World of Warcraft or Magic instead of hanging out with them.

So as the conversation started to take off I noticed something very interesting. Lately a lot of my hardcore gamer friends have been playing this game called “Clash of Clans“, a mobile game from the very same creators that made “Hay Day”; Supercell. This small Finnish company sure knows something about how to catch the attention and retention of players who are used to play very complex and time consuming titles like League of Legends or online MMOs. But making a “casual” game that reaches people who never play (mobile) games or who may think that games in general is a waste of time, this is something that’s extremely hard to do (in my experience). How do you teach a game to someone who’s not even familiar with words like “loot” or “tutorial”? And how do you get millions of them to play your game? Supercell recently sold 51% of its shares worth 1,1 billion € and “Hay Day” is one of the most downloaded and played games for mobiles! 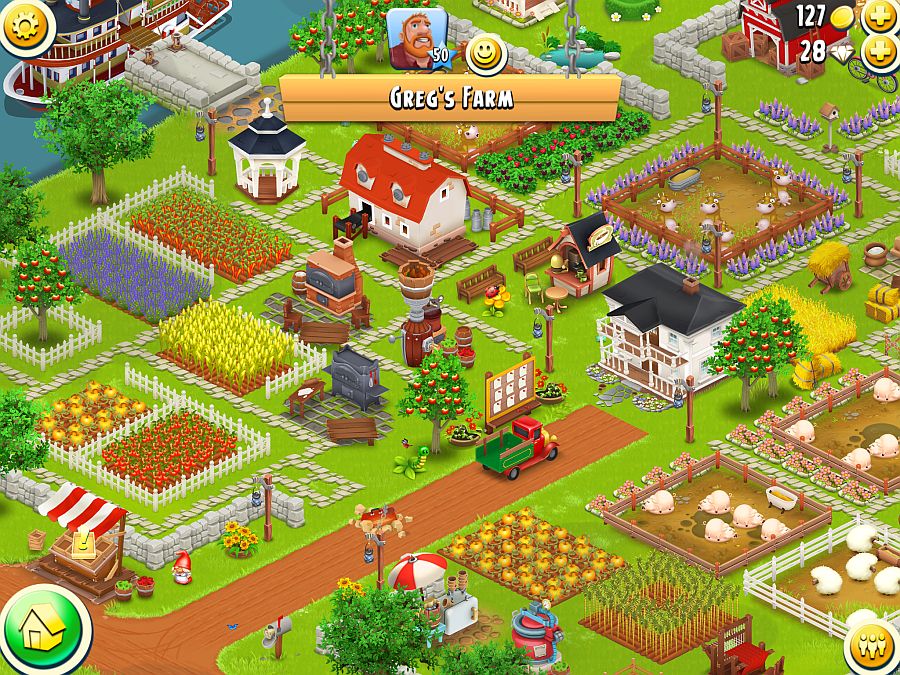 Can you tell the difference? A player’s farm in “Hay Day”. It looks and plays very much like “Farmville”, but this time around the main platform is not FB, but mobiles and touch pads.

As I sat there in the kitchen with Emma and Anna, showing off their farms Anna suddenly became serious. “You know, my cousin is a teenager now and she thinks everything and everyone is sooo embarrassing. It’s almost impossible to talk to her about anything. So I asked her this summer if maybe she played some kind of games or followed some series on TV. Only to find some kind of common topic to talk about. I don’t want to grow apart from her.” It turned bout Anna’s cousin played “Hay Day” on her iPhone, so Anna downloaded the game (it’s free) and started playing, hoping to better stay in touch with her cousin. It didn’t took her long before she was hooked, and to her surprise she enjoyed the game! “Today I play a couple of sessions every day, and I almost feel like I’m addicted to it! I’ve restricted myself to not bring the phone into the bathroom”, she laughs. Emma nods and smiles. My two friends start talking about if one should or shouldn’t connect your “Hay Day” account to Facebook. So my two very non-gamer friends discuss tactics, what crops to invest in, how to harvest your pigs, animations of goats, and they become  super excited when they learn that they both could sell and exchange items like carrot cake with each other. Both of my friends invest many hours a week on taking care of their farms. They proudly show them off and wants to know secret tips and tricks. Is this still “a poor gaming experience” like Farmville’s critics claimed? Is this still not “real gaming”?

“My mother is sometimes very ill”, Anna tells me. “She has this condition where she needs to stay silent and can’t speak because of her throat. I worry very much about her, and she doesn’t live close to me, so if I call her when she’s ill she can’t even talk in the phone, due to her illness”. Anna is obliviously very concerned about her mother.  Anna’s family is very precious to her, and it breaks her heart to worry about her mother when she’s ill. “I don’t want to call her all the time when she’s ill just to check up on her”, Anna explains, “But I constantly think of her when she’s sick or I worry that something has happened if I don’t get a text or a call in a few days. I just want to know if she is OK or needs my help. But without making her feel like invade her life all the time”. 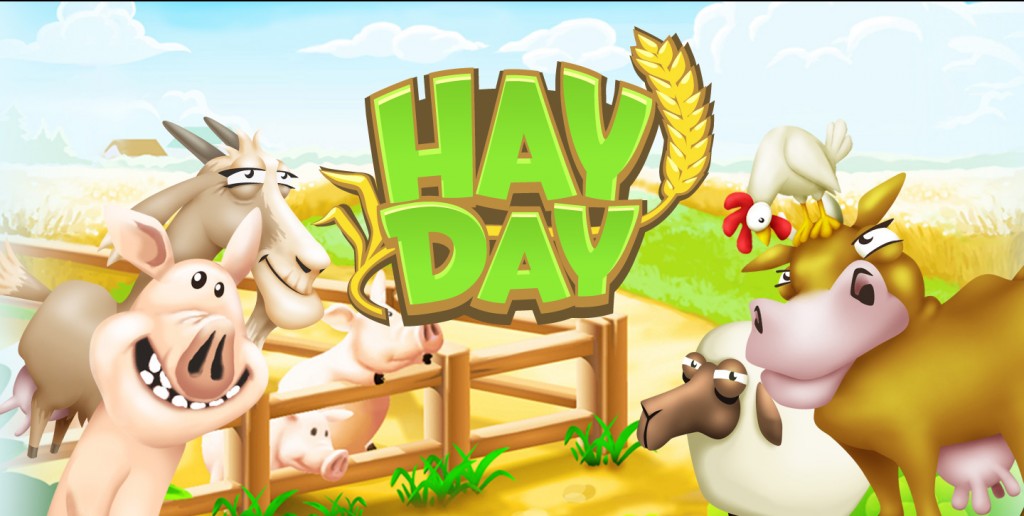 People who only see video games like a waste of time or even a threat to children or society usually claim that games doesn’t add any kind of value to people’s life, or even may be removing value (and morals). They claim games make people violent, lazy or less social. But playing “Hay Day” together, exchanging crops and seeds had brought Anna and her cousin closer, and thanks to the game they now had a neutral topic to talk about each time they hung out!

So Anna suggested her mother downloaded “Hay Day” to her phone. Not only did her mother like the game, she loved it! It didn’t take her long to be as into it as Anna was, and not before long mother and daughter found themselves trading items, exchanging virtual carrot cake in cyber space. I’m a game developer and I’ve never played a video game with my mother!

“The best thing”, says Anna, “is that when I worry  a lot about my mum, and can always log on to Hay Day and visit her farm. Every morning I check if her cows are milked. If they are, it calms me down, because then I know she is doing well and made it out of bed this morning. One night I logged on late and saw that her cows were milked in the middle of the night. So I gave her a call and asked if she was having trouble sleeping. She was surprised and asked how I knew, and so we talked on the phone for a while, which calmed us both down.” Anna smiles. I ask her about the pigs on her farm and Emma and Anna laughs about how you harvest bacon from your pigs and they just become thin versions of themselves that you then need to fatten up again. Anna’s farm is very well organized and she is obliviously proud of the work behind it.

This “simple” game is bringing Anna closer to women from three generations in her family. It connects her with friends and gives her something fun to do many times a day. It helps her to check on her sick mother without making her feel like she is “babysitting” her own mother. It helps her stay in contact with her cousin. How could this not be meaningful? I’m sure there are plenty of stories like these out there. Games that work as a tool that build social bridges into real life. Games that ties together generations and help us get closer to each other.