Hey guys, what’s up? I’m in Finland right now, staying here for a while. This means I won’t have access to my drawing tablet, nor to fancy stuff like Photoshop or fully computers. Might stay some days or weeks, still haven’t decided. Without telling you too much I’ve kinda applied for a job or two, and so far they seem to like what I told them. Or at least I hope so…The jobs are in the computer game industry, but not in the art department. Wish me luck!

Before leaving Sweden I obtained my first Moleskine sketching book and some colored pencils and crayons. I also brought two awesome art books with me, belonging to my awezum friend Karrey. So now I’m sure I got plenty to do while I’m away from the computer. 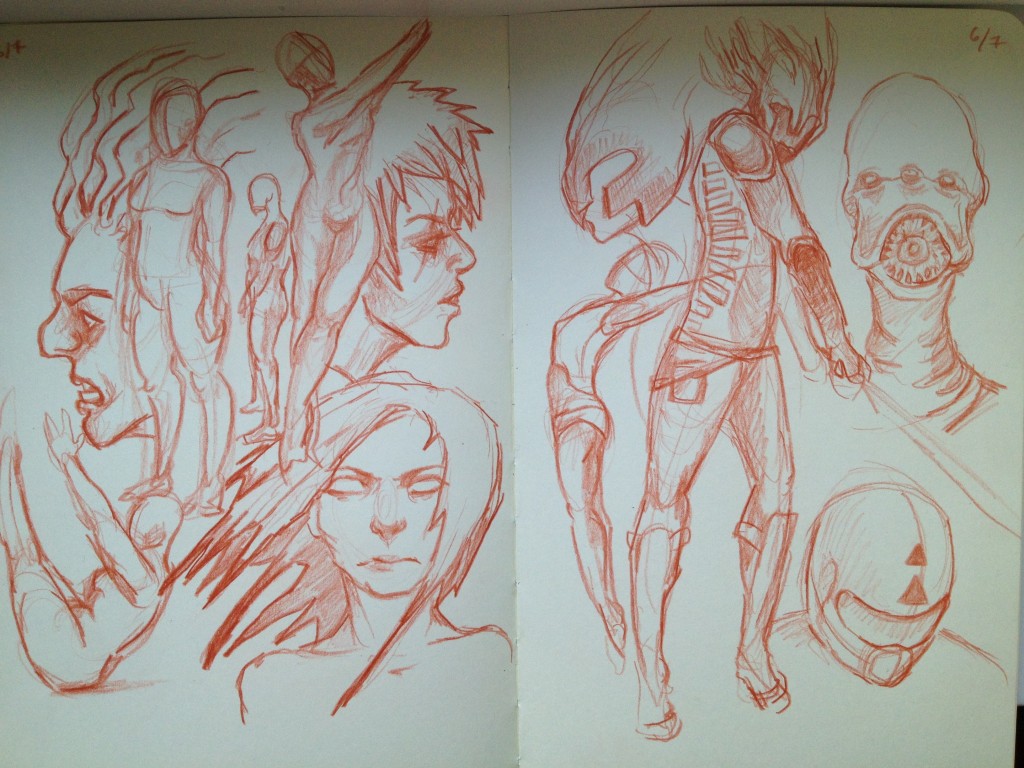 6/7-13
Drawing some fun stuff. I found plenty of my old drawings while cleaning out my apartment this week, and I realized I don’t draw the way I used to anymore. My mindset has shifted from “this is fun but I don’t know what I’m doing”, to “Let’s learn, study and improve”. I kinda miss the feeling of chaos and fun :/ 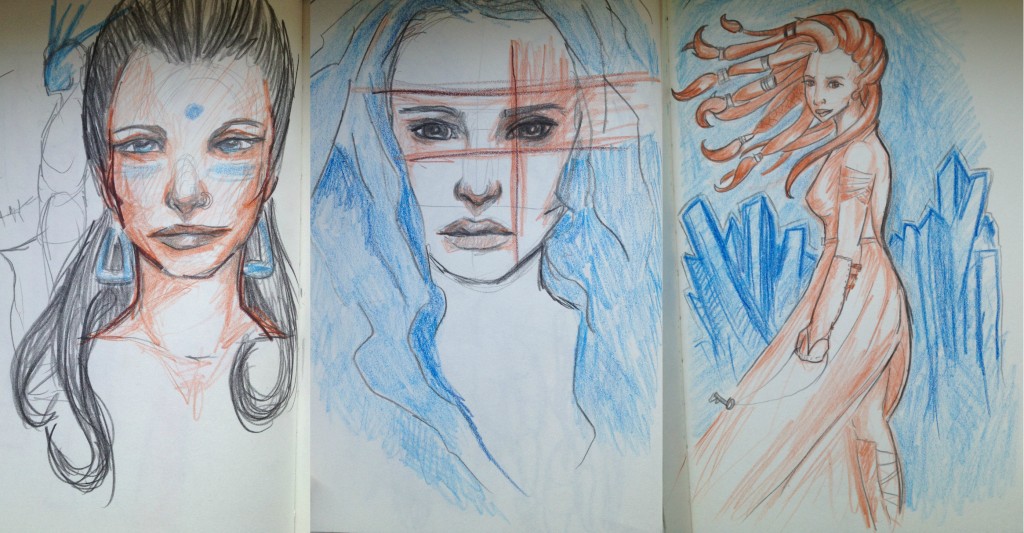 5/7-13
Some random girls I made on the train and ferry omw to Finland. I spent like 12 hours on the road to get from Malmö to Finland. Lucky me two of my cool friends wanted to hang out with me while I was waiting for the bus. You rock! 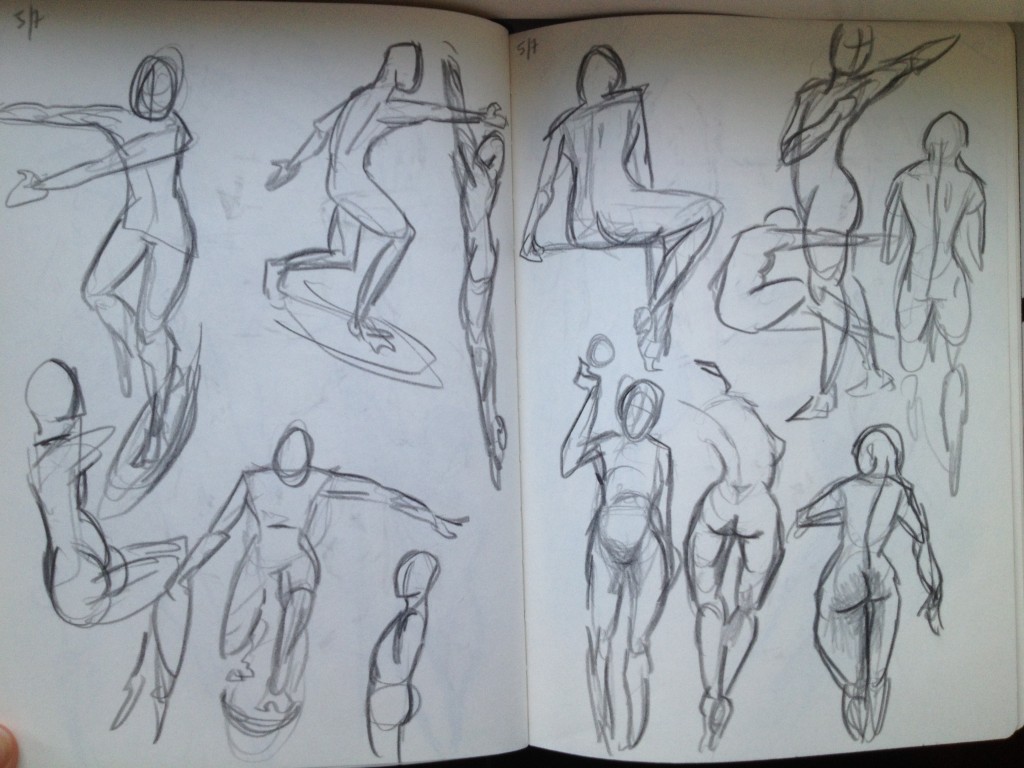 5/7-13
Some gestures from imagination. 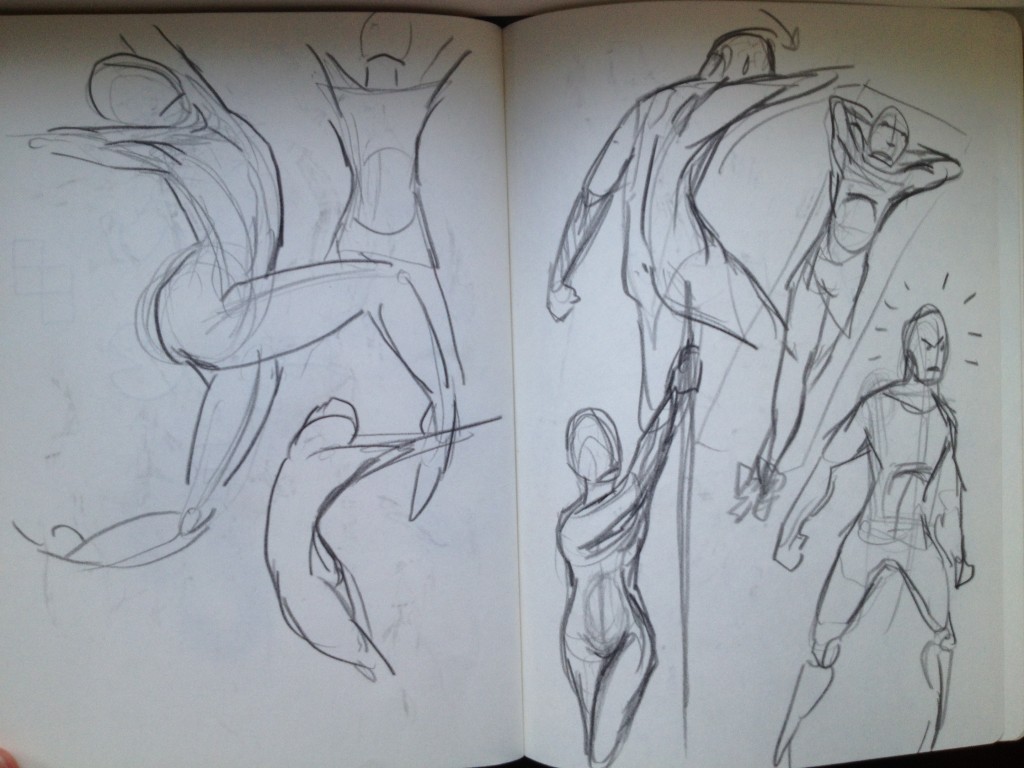 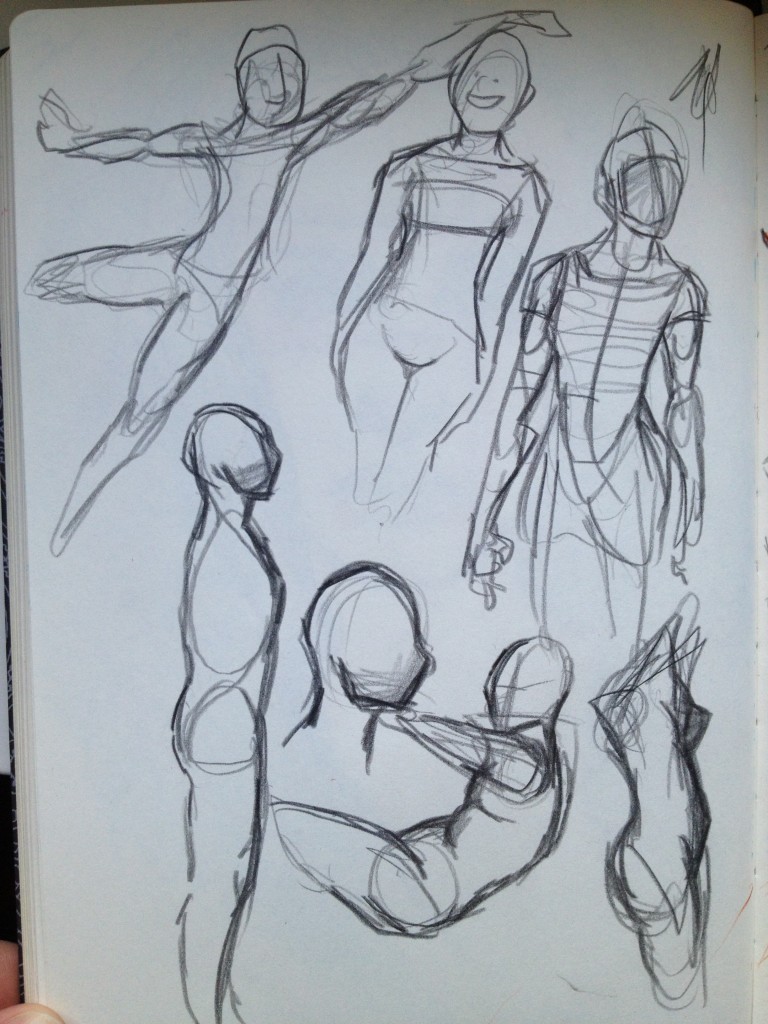 5/7-13
And OMG another page of gestures, who could have guessed?!

Before I call this post done I want to take a few minutes and speak my mind about the site Conceptart.org. It’s a site where a lot of super talented, hard working artists gather to show their art, to get advice  or to talk art. That’s great!

However, I must say I don’t really like either DevintArt or ConceptArt that much. DA had some really bad user design not too long ago, and they still try to push the premium version down your throat every time. CA has A LOT downtime, laggy image upload, shaky updates that removes older art etc. I  understand there are a lot of people working for free to ensure the site is up, but I really don’t trust them with my art : / Some days I can’t upload, other days the “retrieve password” function is broken, and during the latest update a lot of my old posts became corrupt. That’s why I don’t rely on them for sharing my stuff with others. I would love to do it however, because then I could hang out with fellow artist and get feedback on my images. I have been sharing my art mainly on this blog and on FB to ensure I control the technical side and can tack the numbers if I want to.

Today I get almost 0 % feedback or critique on my drawings, and that’s bad if I want to develop. What’s even worse is that I start to feel very alone. Like I live in a bubble, and create stuff in a vacuum. Over the 10 months I have been doing this “Learning To Draw”-project, where I constantly try to improve my skills, I have gotten very little feedback, maybe 4-5 times someone has bashed my stuff in a constructive way. I would love to draw together with other people, to have someone to talk to about all this stuff that’s tumbling in my head. Two times during the last 10 months I have found someone to really talk to about values, composition or other art geekery. And that’s not enough. Maybe I’m just not seeking contact in the right way. I don’t know. Maybe people don’t take my attempts seriously and don’t consider me worthy of their time to give critique.

So I decided to bump my old thread over at CA and see if I can get into contact with some fellow artists. I’m not too excited about it, and I don’t expect that much, since constructive critique seems to be supermegaduper rare to get over there as well? But hey,  would love to get proven wrong!

What struck me while I browsed the jungle of old threads and sketchbooks over at CA is that a lot of my old friends from my time at university had sketchbooks. But none of them are updating anymore (or they do, but it’s like once a year). I suddenly felt even more alone, like I just arrived to an empty train station, and the train left in 2007. 2LM8.

I feel like I’m walking trough a desert on my own. Someone told me there is a city of gold out there, somewhere. I guess I just better stop whining and start walking again…

Here’s my sketchbook at ConceptArt.org LINK