So I just finished the biggest thing I’ve drawn digitally, 7 hours spent all in all. It’s no master piece of doom & mad skillz, but I learned tons from doing this! This week I saw the new Iron Man 3 poster all over Stockholm, and frankly I got a bit tired of the damsel in distress vibes it gave me. I haven’t yet seen the movie, but I decided to make my own version of the poster. As someone who grew up with Action Man, TMNT, Street Sharks and X-Men I want to feel women can be heroes, saving guys, not only guys should be offered the cool suits and tech! Here are the steps and final image, enjoy! 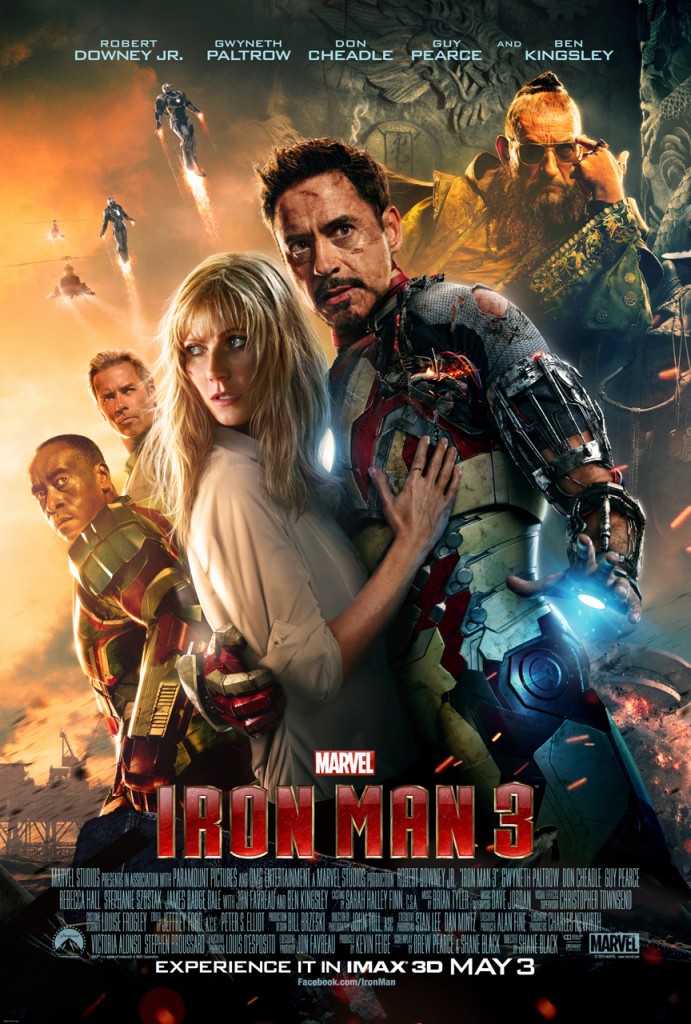 The original image looks like this. A lot of stuff going on at the same time, visually. 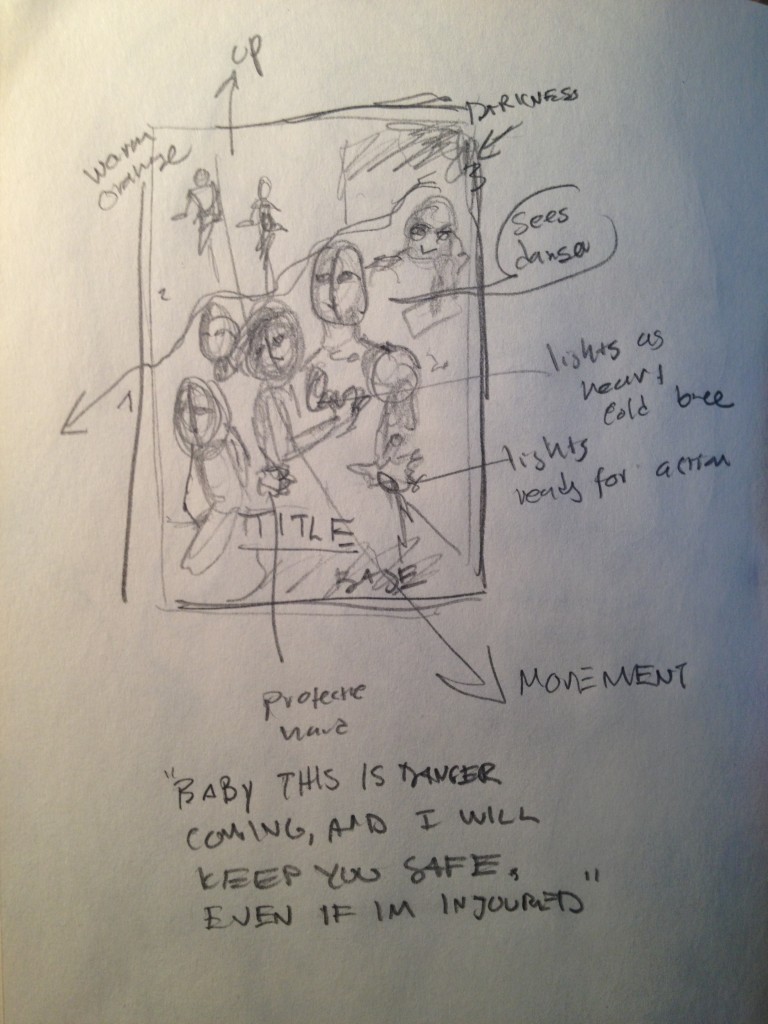 1.The first thing I did was to make a quick reading of the visual messages displayed in the poster, trying to get aware of the flow, the lines, the forms. I want to get better at planning what I’m drawing, not just go with what “feels good.” I did this step manually in my sketch book since I still prefer to draw with pen and paper : 3 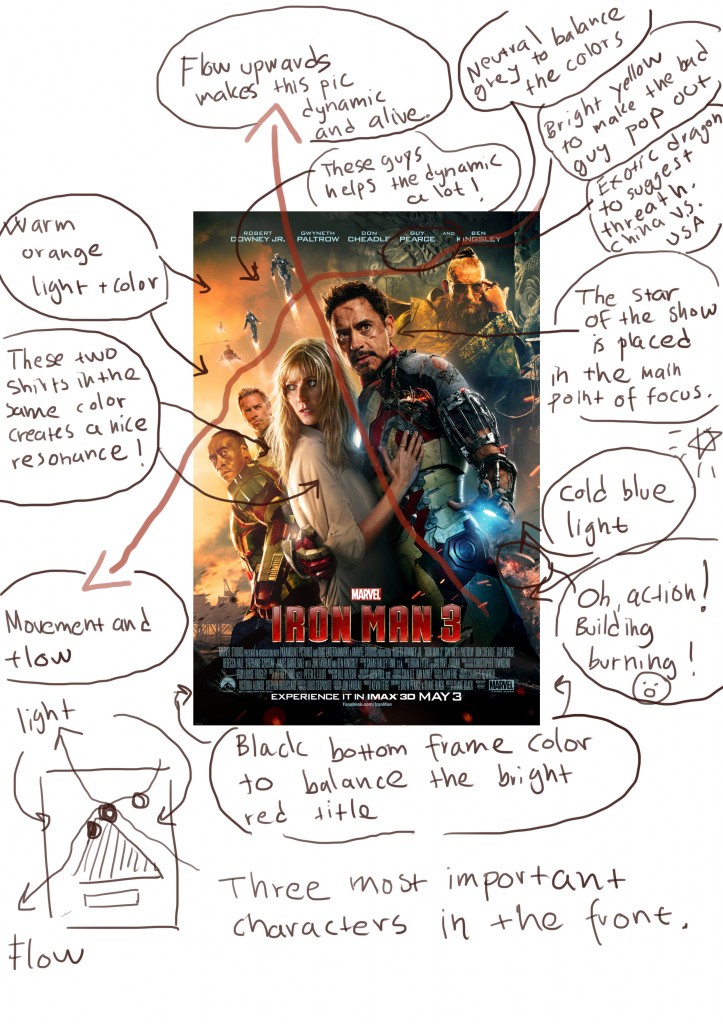 2. Diving deeper into the visual messages. This image is really well planned (as you would expect from something advertising a multimillion box office title), all the small details communicate something about the movie that hopefully would make us want to pay money to watch it. The image has a clear flow, the main characters placed in the front, balanced colors and two clear sources of light. Sorry for the messy notes, haha! 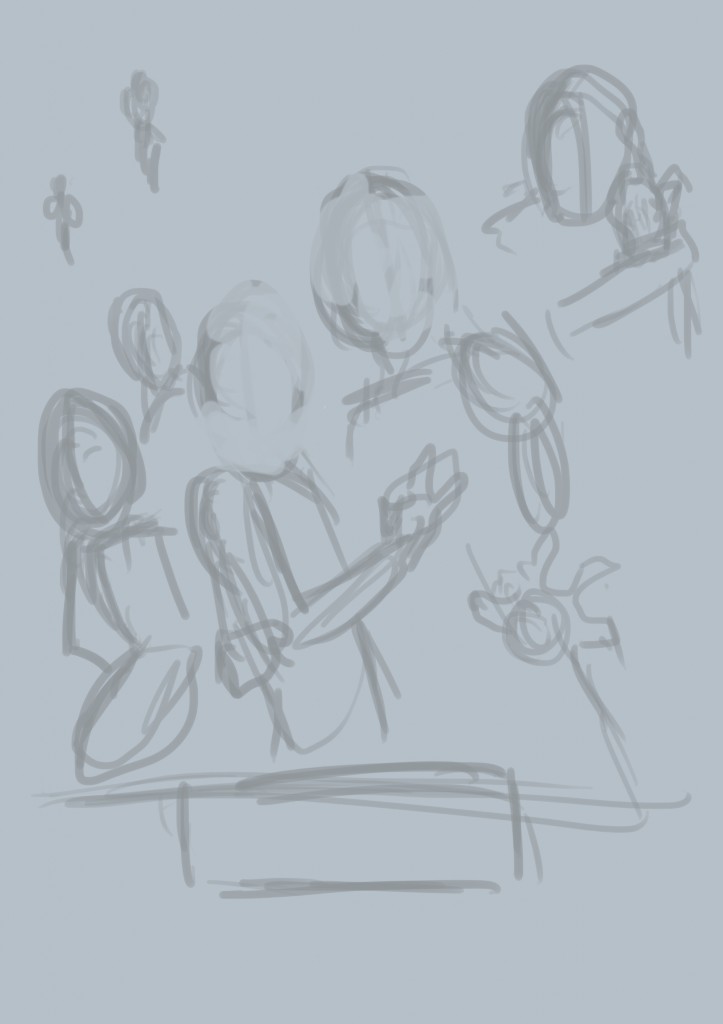 Step 3. Rough drawing to understand the placement of the figures and forms. 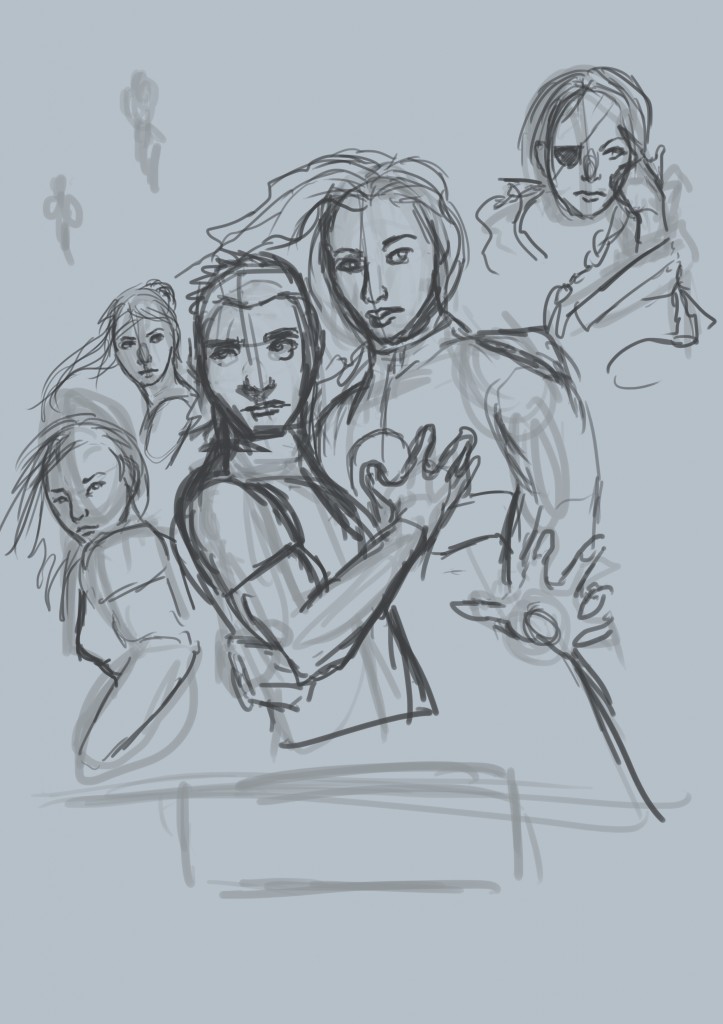 Step 4. Adding details to the basic shapes and form. 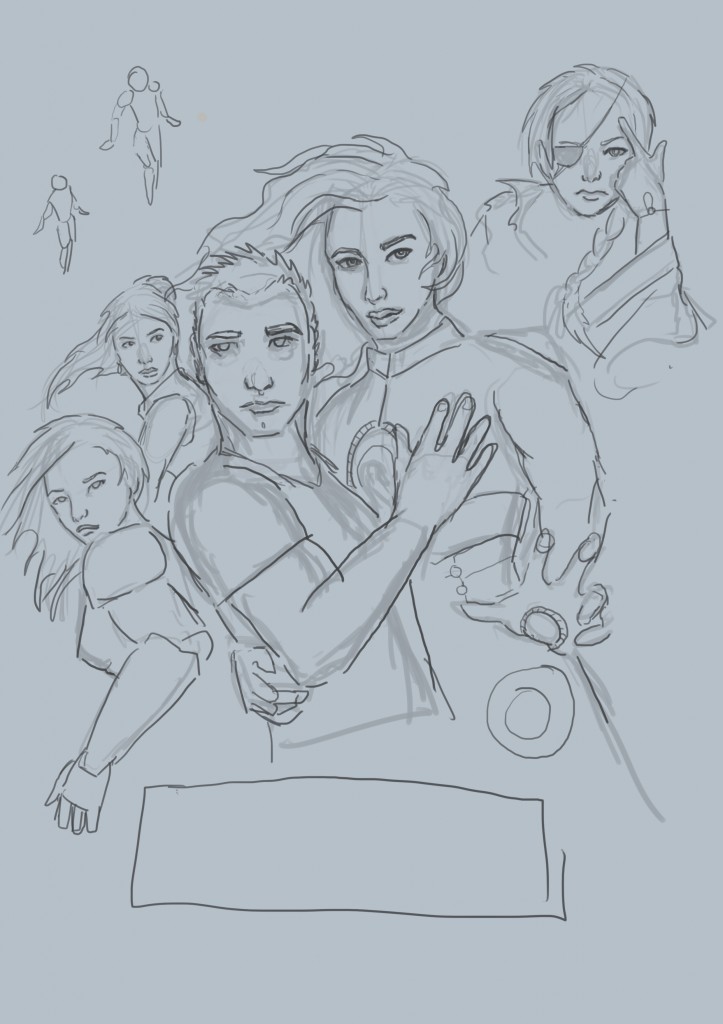 Step 5. Still keeping a template for the big text title. I learned how important it is to take the text space into consideration when designing when I used to make news letters at Junebud. Adding details and making line art. I know now that I should have worked more with this to add a bit more cartoony feeling since Iron Man is a comic book hero, and it would have helped me to make the small details in the suits stand out more in the end. I think I got a bit impatient and rushed this step. 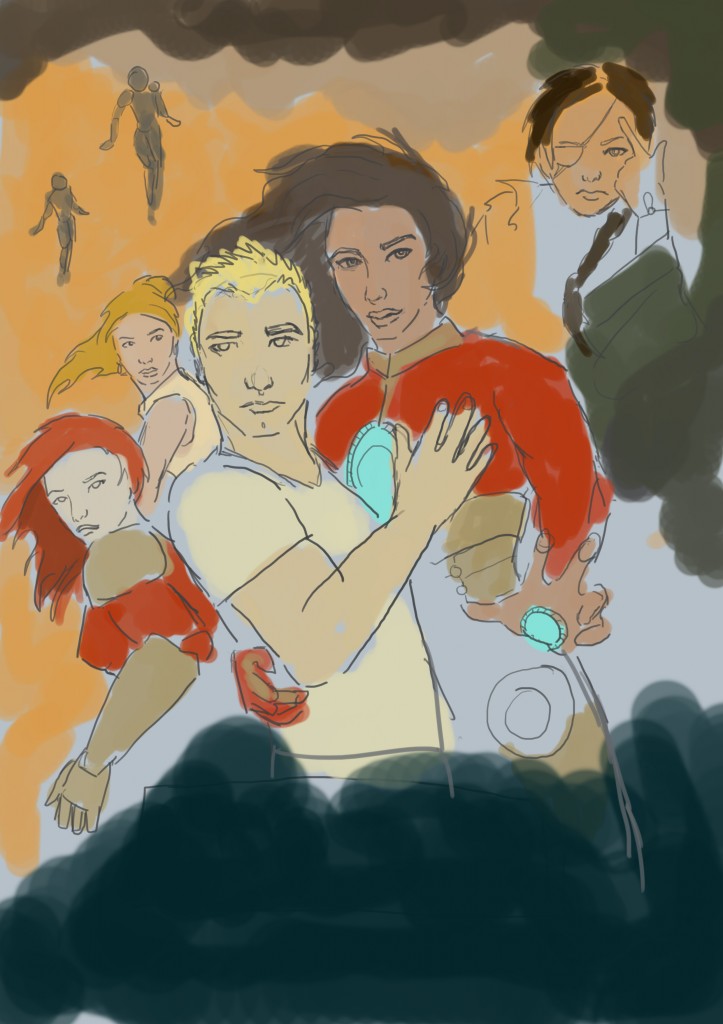 Step 6. Adding basic colors, keeping the layer of line art on top. I tried to sort my layers and make sure they all had a clear purpose, not paint random stuff on random layers like I usually do. If you keep assigning certain layers to certain parts of the image such as basic color, highlights, background, effects etc, it’s much easier to adjust specific things in the image without ruing other stuff in the process if you can change one layer at a time. 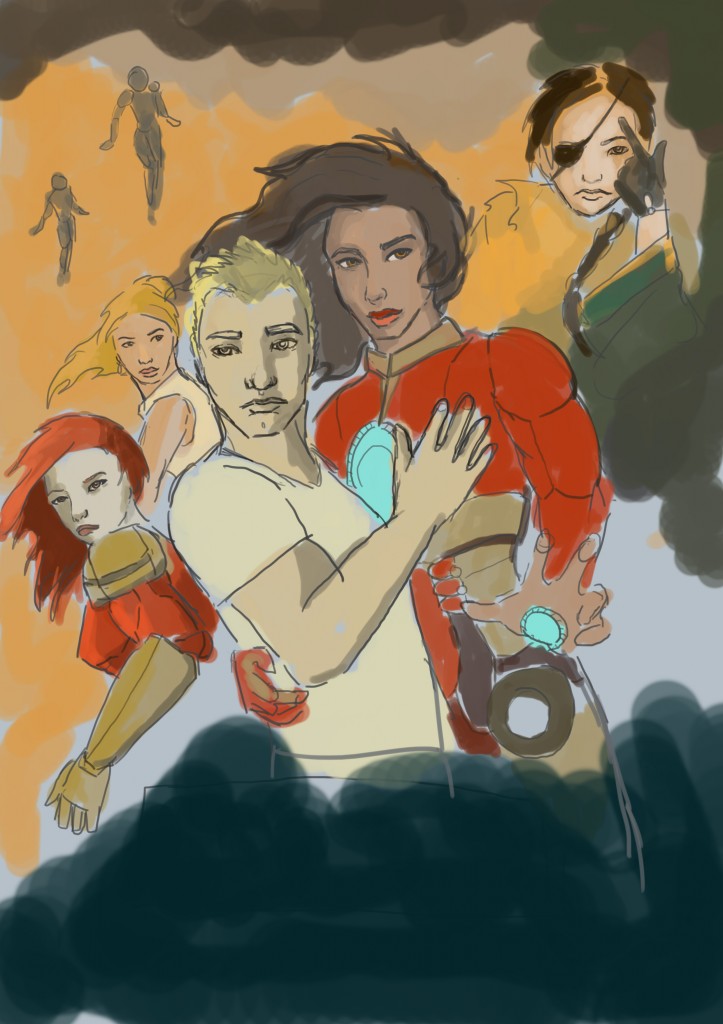 Step 7. Still exploring the character design. I wanted to change some design, but still keep the basic forms, colors and feelings to make sure people who saw it understood that this is based on the Iron Man IP. Instead of giving the bad guy a pair of shades I gave her an eye-patch, which adds my own twist to her design. I replaced the black skin color of the side-kick and made her Asian instead as a homage to my Chinese friend who loved this movie < 3 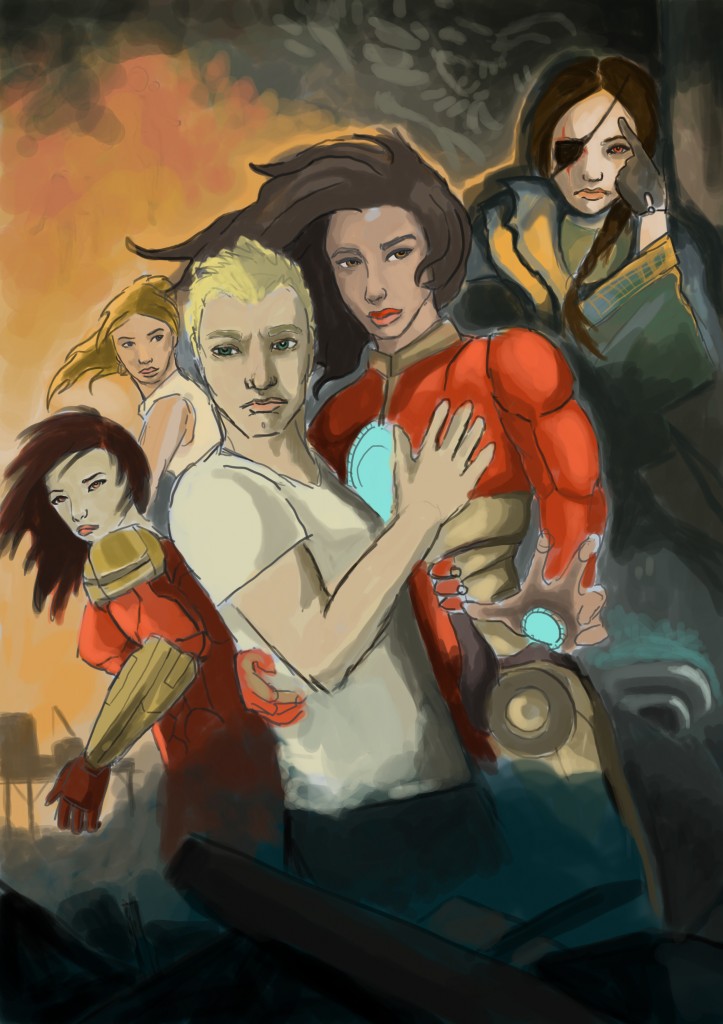 Step 8. Working the colors, the light and adding depth to the image. I really don’t have any idea what to do about the background, also the facial features of the guy are kind of hard to solve. I make some anatomical corrections to the guy’s arm and add details to the background as well. The Asian side-kick got a color change on her hair since all the red  just became to “noisy”. 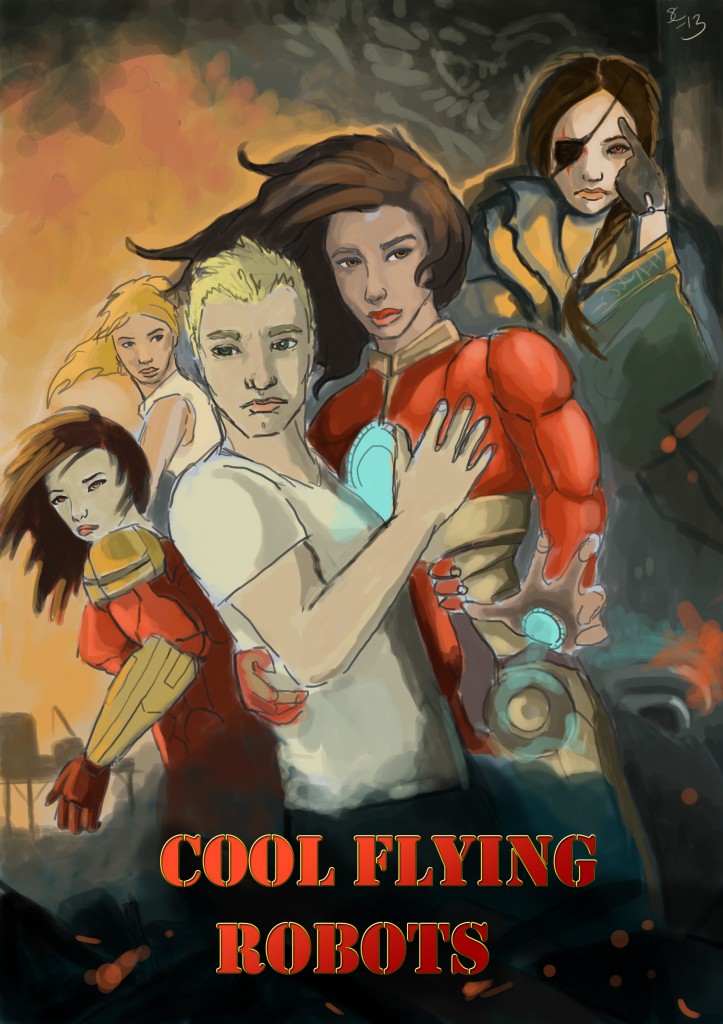 Last step! I added my home made version of the movie title (followed a tutorial on how to create the right looking font at first, but it got too boring). Highlights, some color corrections, working the light a bit more and the details such as sparks. Total time spent: 7 hours.

This was exhausting but rewarding! I even got up before work and painted some, and that has never happened before. After posting this image on my Facebook a person who usually think “all this gender nonsense has gone too far” gave me a call and said he though this image was a really nice idea, and that made me smile!

I want to get better at planning, to create my own work process and have some kind of road map when painting. It might not be as glamours to follow a routine when painting, but it’s going to speed me up and deliver better results.

DeviantArt gallery featuring most of the stuff I made so far: [click here]