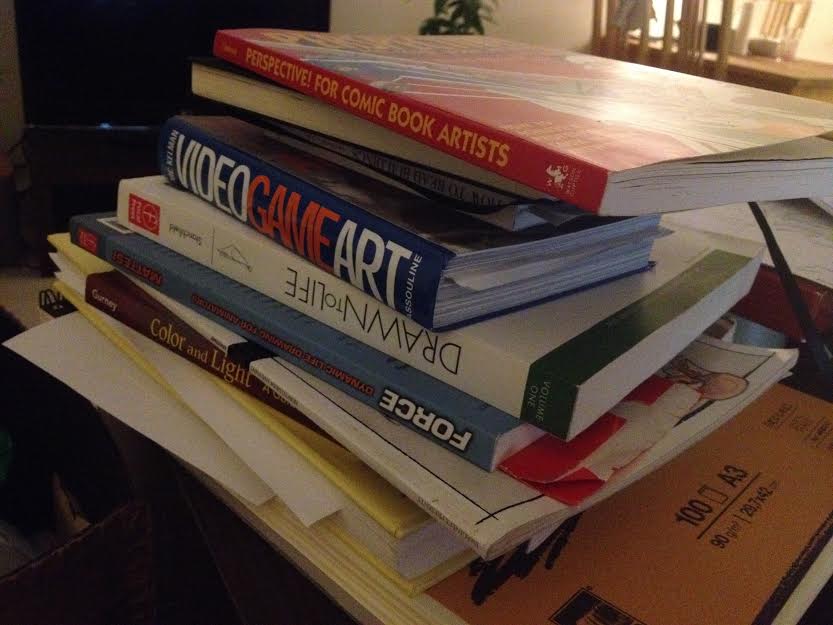 Alright, I’ve analyzed some about why the quick sketch of the car failed so hard. From what I can come to understand here are the core fails that I made:

1. I didn’t see the car as a 3D object. I somehow saw the image as just a 2D exercise about color and how the sky reflects in highly reflective materials like the hood of a car. I wasn’t fully aware of what I was trying to accomplish or learn by painting it. My hand was like “hey this is a 2D image, let’s learn about the color reflections“, while my (unconscious) brain was like “woah, woah there’s a lot of perspective on this 3D form, how are you gonna handle this?“. And so it ended up in a car-wreck.

2. Perspective. This is like my blind spot when it comes to art. I have no idea of how it works. So I’ve purchased some videos from CTRL Paint and started to read the book called “Perspective! For Comic Book Artists” that my friend Karrey borrowed me a while ago. I can”t beat around the bush forever and deny the fact that I don’t have any clue about how this shit works. Let’s hope I can level up my skills. 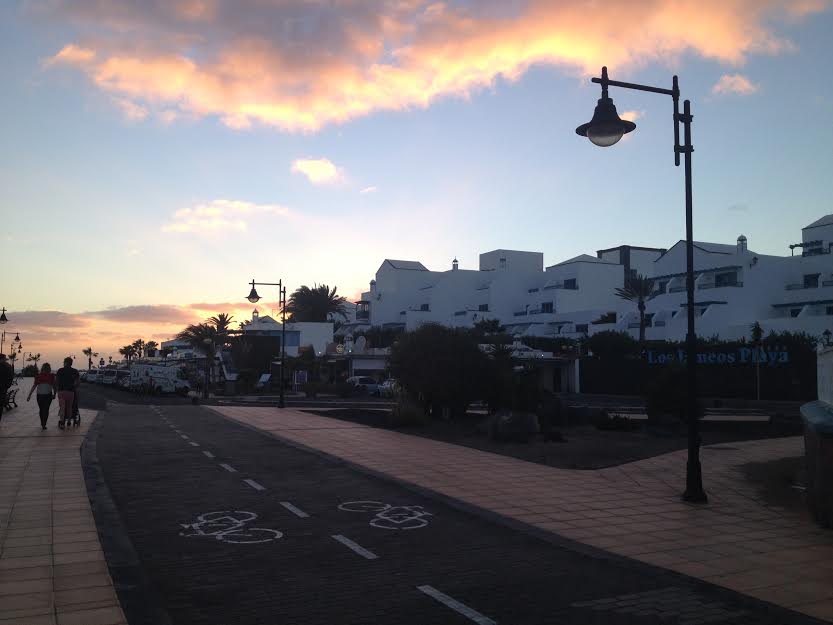 On another note, I’ve shot some photos from here and there just to remember special color and lights. This one above is from Lanzarote, from my vacation two weeks ago. The light when the sun was setting was absolutely amazing, but my iPhone is just a tiny bit too crappy to capture the light in it’s full glory. All the stuff and small particles of Saharan sand floating in the air made the sunsets truly amazing. The light then bounced on the water and reflected the blue right back at the white houses facing the beach. I’m sorry my camera can’t do this justice, tried to snap some reference for painting later. Here’s another one that maybe captures the gradients of the sky reflecting on the white houses: 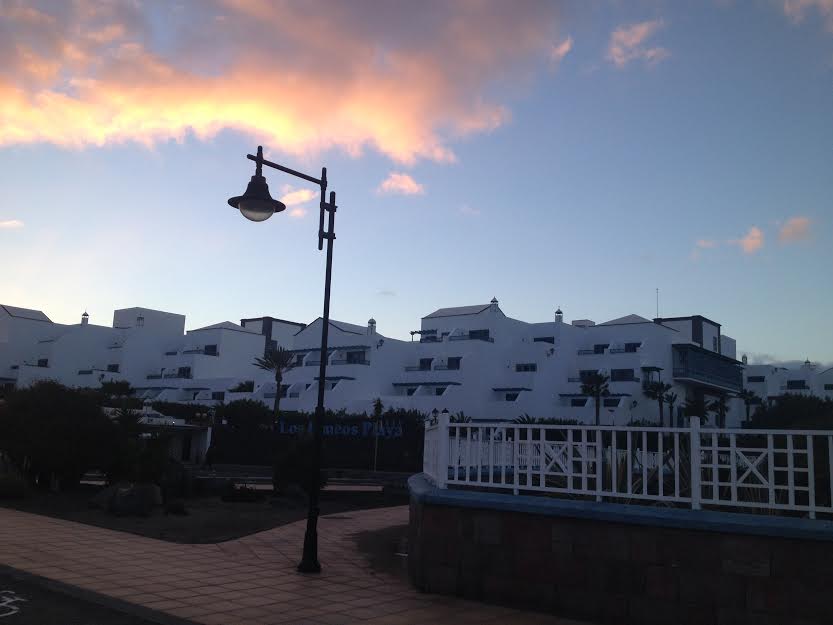 Damn, I just love sunsets and sunrises! They are so beautiful and magical. Everyone of them are unique. Some colorful silent explosions in the sky, others barely noticeable at all, lasting only a few moments and gone forever. I’ve noticed that different parts of the world actually experience different light and different sunsets. When I was living in Finland, out in the Baltic Sea, on the Åland Islands, the light was truly different from the light I experience here in Southern Sweden. The light on Lanzarote was different from the light in Sweden. I guess it comes down to the angle of degree the sun tilts towards Earth, if you are surrounded my sea or earth, time of the year and other stuff. It sometimes seems like the sky is “big” or “small” depending on your own geographical location. When I was living in Skövde, Sweden, the sky seemed much broader and higher, and here in Malmö the sky seems a tiny bit closer. I have no idea why? As a kid I always believed it to pretentious bullshit when artists spoke of “the light in France” or wherever. I was stupid enough to believe the sun must give the same light to everywhere on Earth, the only difference would be how much of it.

Here are some skies I’ve collected over the years: 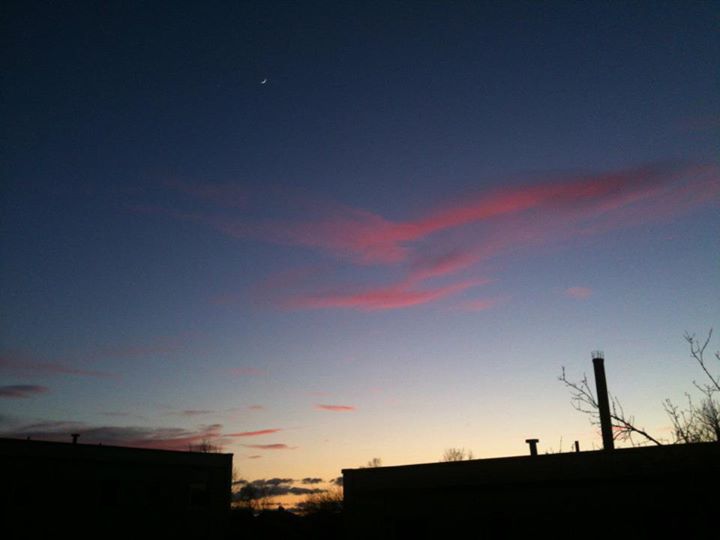 Sunset over Skövde, Sweden, spring. Skövde had some of the most amazing sunsets I have ever seen. The sky was often clear of big clouds and the colors were often amazing. I love how a single star is visible, it’s such a nice contrast to the fuzzy pink clouds. 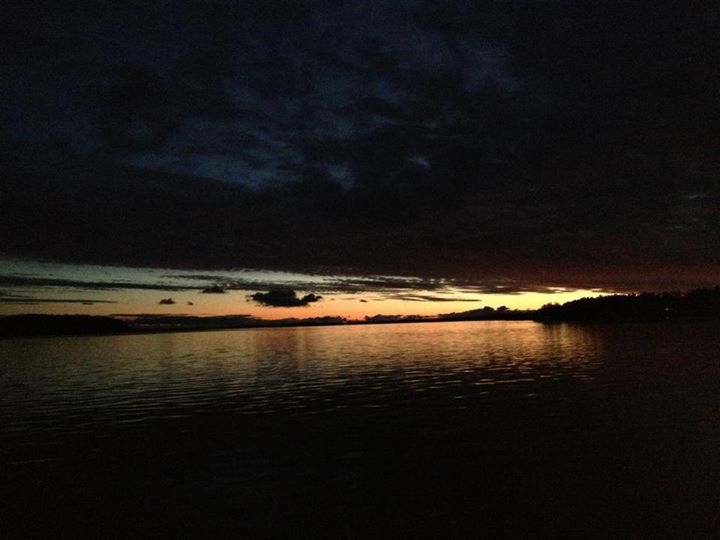 Sunset over Åland, Finland, late autumn. I like how it looks like the big, dark clouds are swallowing the last light. There’s plenty of green and yellow in this scene, almost no pink or clear blue. The water makes such a beautiful mirror. Sometimes when I’ve seen photos from Åland I have recognized them based on the light, before I knew it was shot on Åland.

Last one, a hot summer night here in Malmö, South of Sweden. Denmark is visible across the sea, the sky clear and the soft gradients absolutely beautiful! 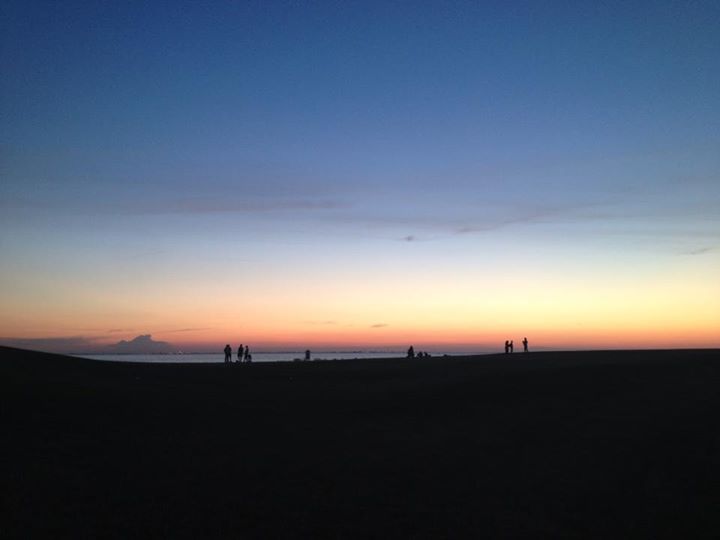 Right now it’s early spring here in Malmö, and each night there’s an amazing light between 5 and 6 o’clock just when the sun sets. I have tried to capture it with my camera, but it’s very elusive and my IPhone just can’t keep up with the show. When the sun sets it’s this clear, perfect almost glowing blue, stars peeking trough and the air just feels so “clear”. Hard to describe, and it only lasts for a couple of minutes. Some nights I’ve run right up to the attic in my new house, just to have a chance to see the show. I found this small, small window in the roof in my storage space, big enough to offer a small, cropped view of the sunset. Haha, call me crazy, but it’s totally worth running up the stairs for : D 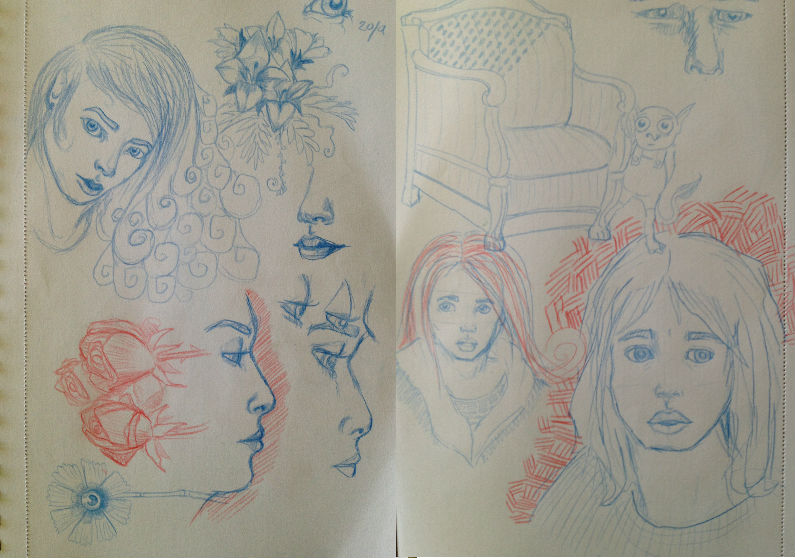 Practicing faces, forcing my sis to sit as a model for me, hehe! Trying to draw furniture, which is totally new to me! Realized I want to draw a house, that’s something I have never done before! 20/9 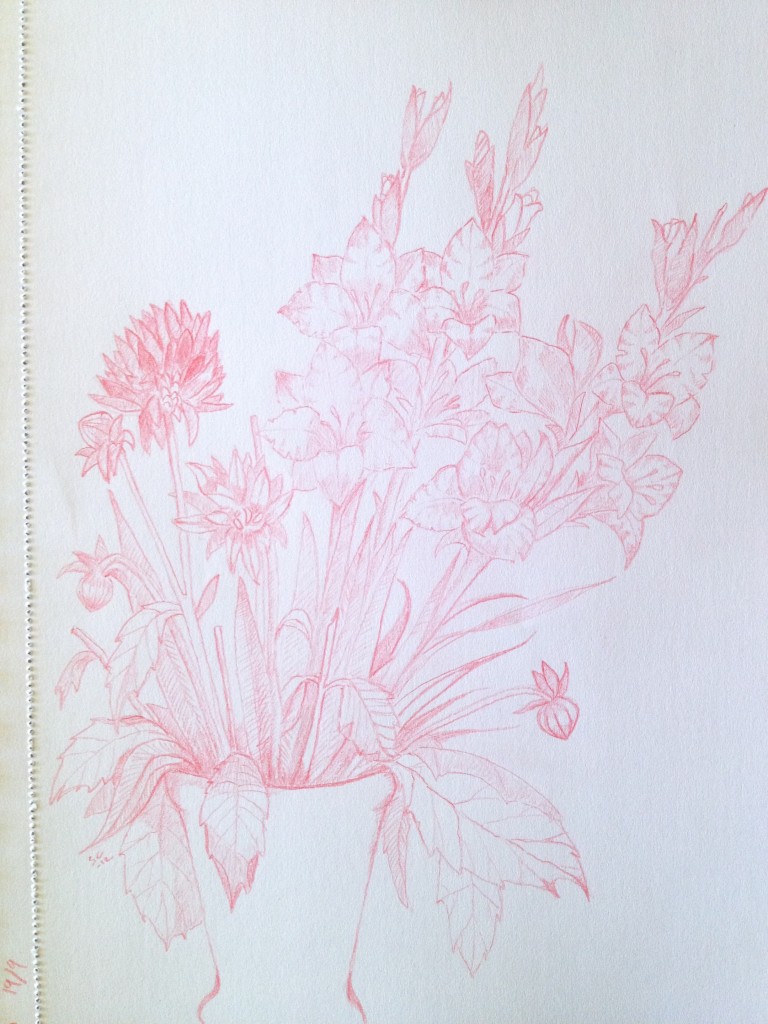 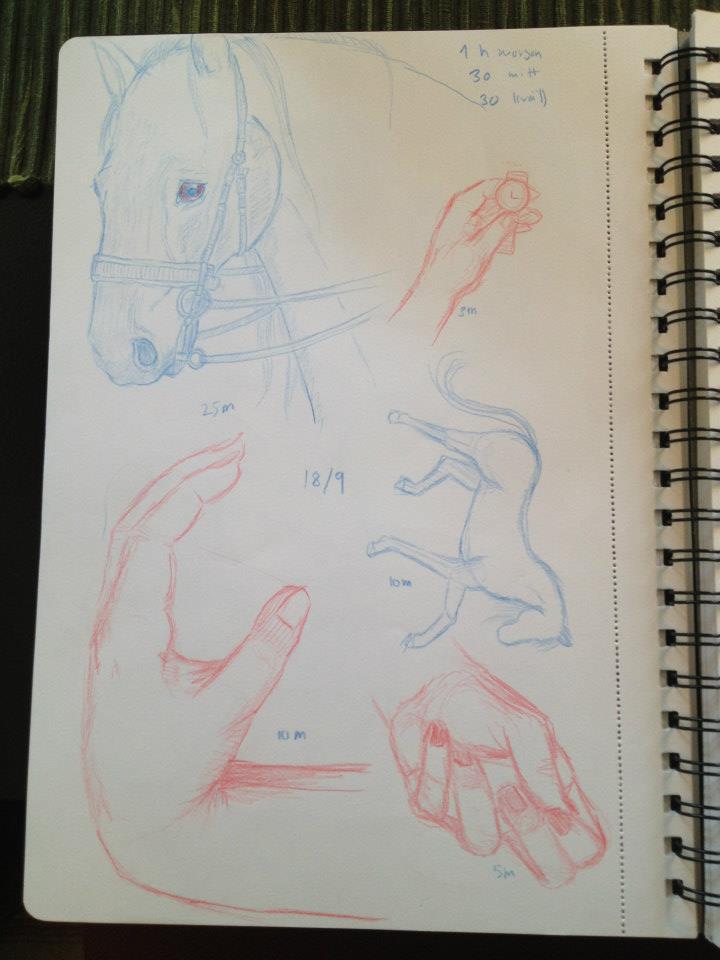 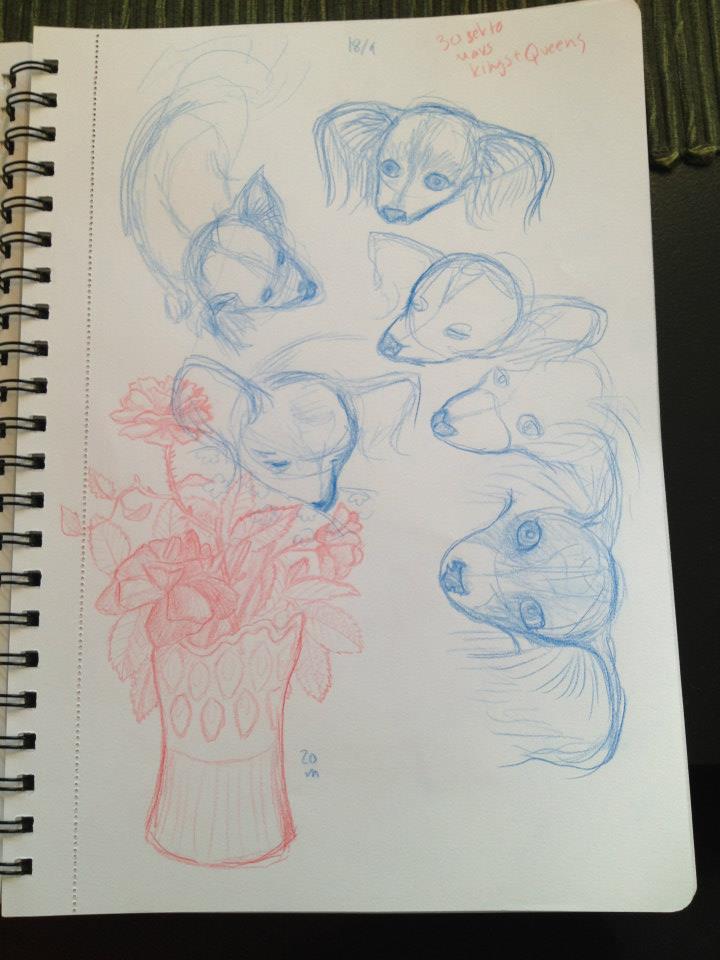 My dog and some real life roses from the garden. 18/9 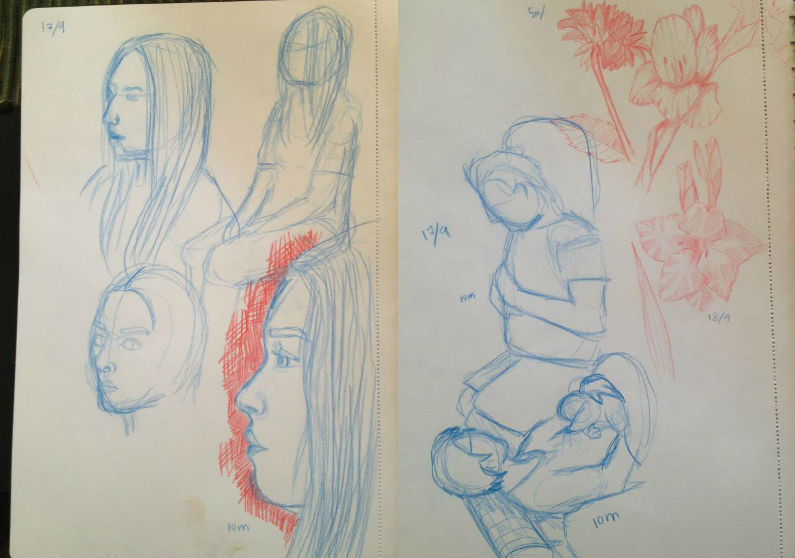 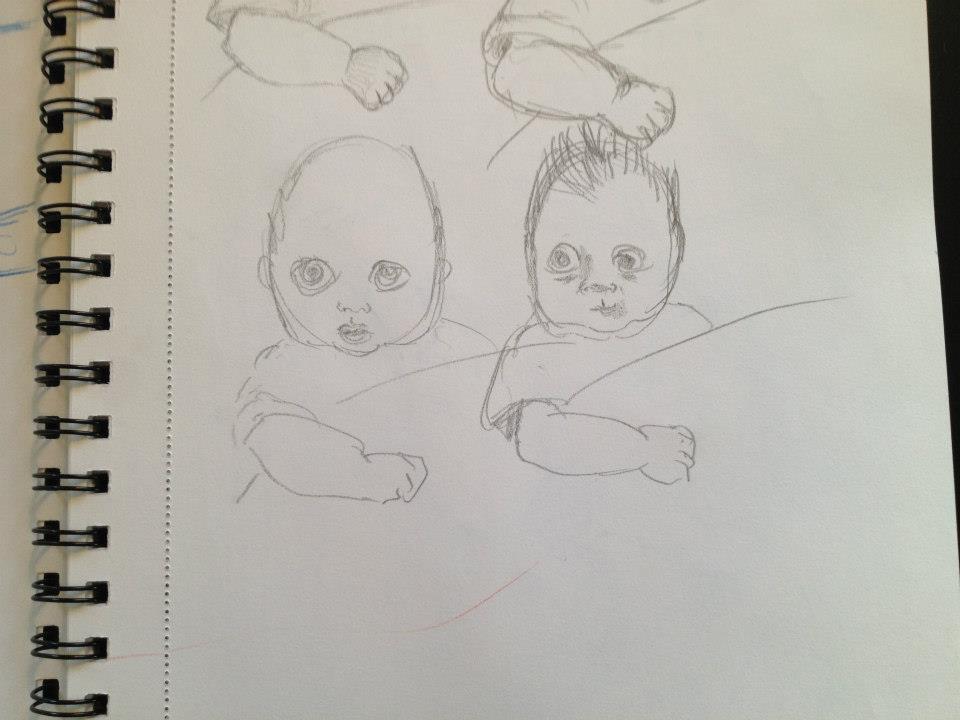 Investigating babies and trying to find out what makes them cute. Hmm…these babies looks a bit uncanny xD 16/9 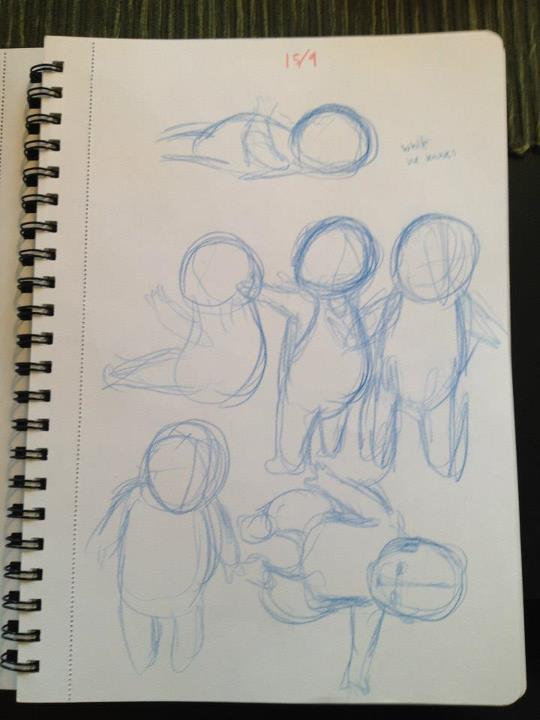 Baby poses from real life. First time ever I draw a baby, why are they moving so much?! 15/9

It’s time for another batch of my “learning to draw” photos! I know some of them look a bit scary (the babies pliz)! Had a hard time getting back on track with the daily drawing now when I’m away from my usual routines (I’m still on vacation in Finland, hanging out with family). Also, I’m trying to limit my daily Internet usage to a maximum of 2 hours now, realized I want to do other things with my time. It’s so easy to just sit in front the computer, browsing away when you could learn stuff, meet friends or draw instead. I’ve realize multi-tasking is bad for you, it makes my mind behave like a pinball game, so now I’m learning to do one thing at a time. Finish something before I start a new task.

Speaking about that, I’ve made some changes to my life this summer. If you read the post named “Mindless Behavior“, you know I decided back in July to get rid of all crappy scandal blogs I used to read just to pass time (I was on vacation then, so hey, I had plenty of time to kill). At the same time I kicked away all the nonsense fashion blogs, the brain dead gossip magazines and stopped visiting sites like 9gag and Reddit. So far it has worked very well, and this “Learning To Draw” project has sprung out of all the extra time I freed up! The next steps are to restrict my computer usage for work or educational purposes only, except for 2 hours of Internet when I can do whatever I want to. Also, I haven’t been drinking alcohol for 2 weeks now, since it messes up my workout and skin.

I know, I sound like a control freak, but really, this is just about cleaning out distractions from my life, and focusing on living my life as I want to live it. Visited an old relative this week, and to my great sadness she could only barley recognize me anymore. I suddenly realized, there might come a time in your life when you won’t be able to even hold a pen or hear music anymore. You will not always have “tomorrow” to start living your dream or learn all those things you want to learn. One day you might even forget what your family looks like, and then it will be all too late to craft your masterpiece.

So get out there and start doing, don’t just dream. Build the life you want to live. It’s not easy to find out how you want to live your life, and it takes courage to follow your gut feeling or dreams. Sometimes “started” or “done” is better than “perfect”. You have a maximum of 100 years on this planet, make the best of them! 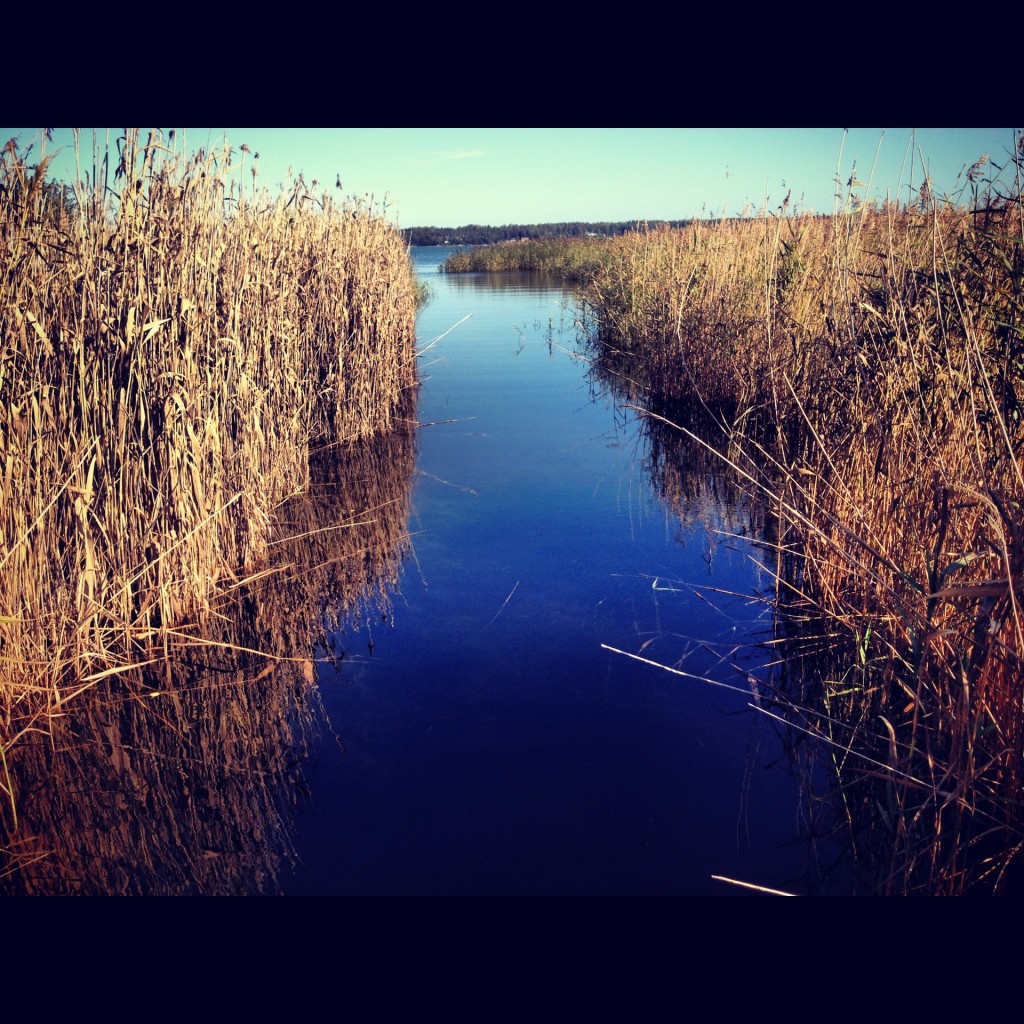 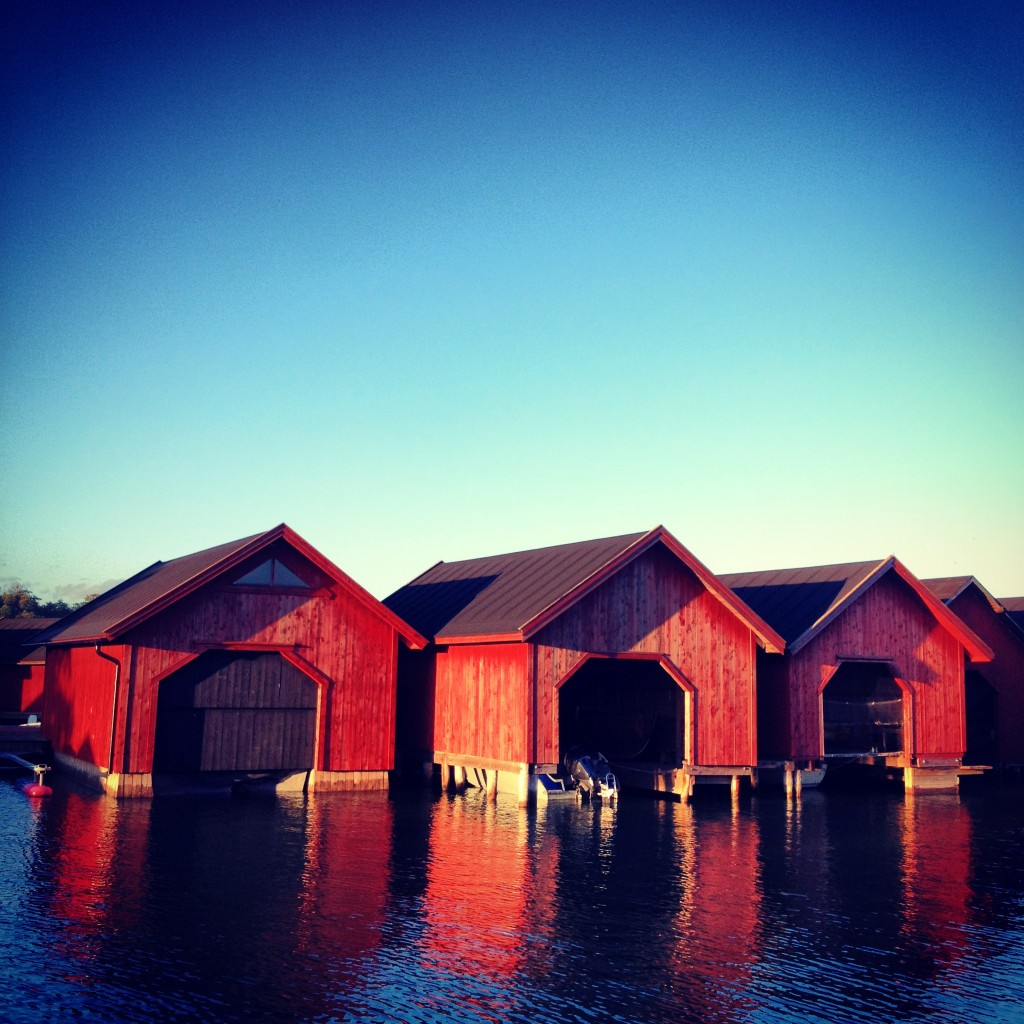 Traditional houses where you keep your boat! 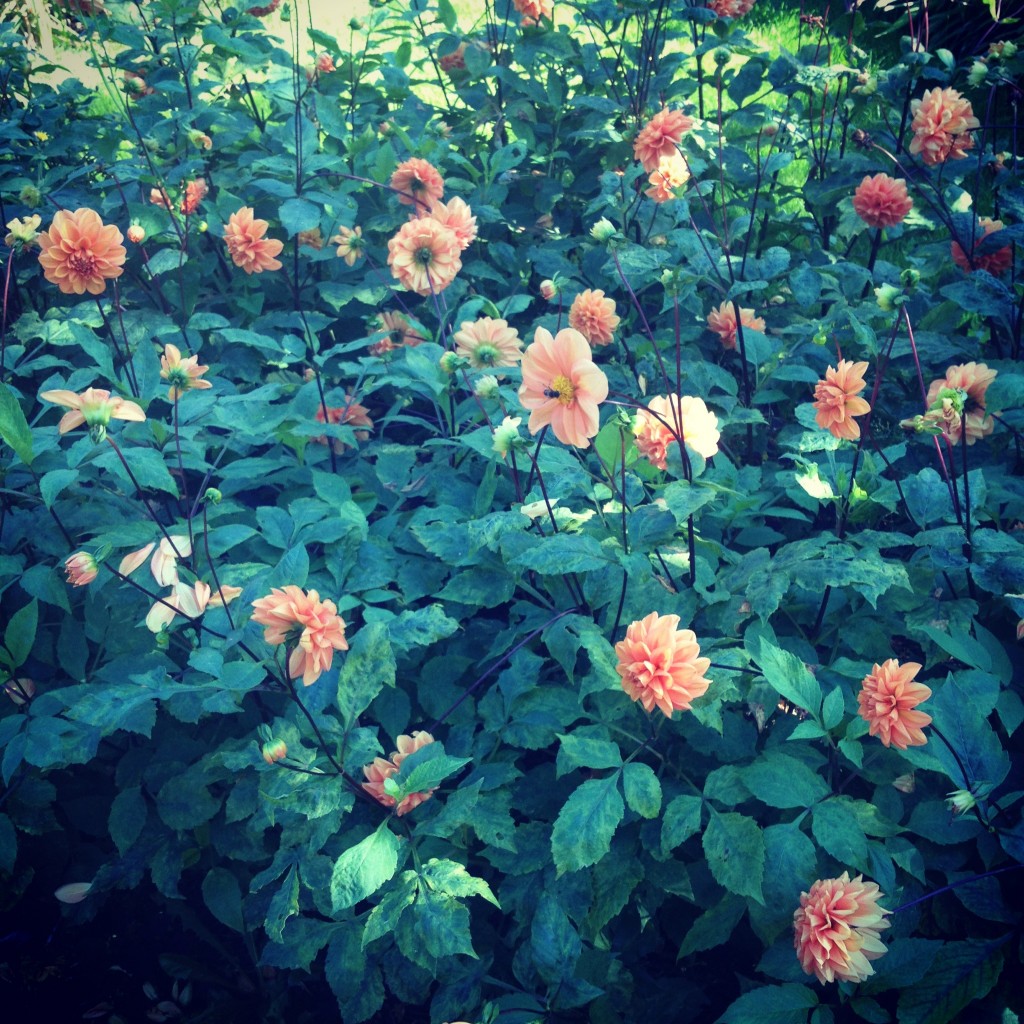 The last flowers standing their ground towards fall.

What would have been a weekend on the Åland Islands (Finland), has turned out to a full week of vacation.

So I decided to stay on Åland for a while, instead of hurrying back to Malmö. Got my family here, so I’m hanging out with them, chilling and playing with my dog. Yesterday I had an ice-cream with Lucas Gustavsson, a Swedish/Finnish fashion blogger. He is kinda like a childhood friend to me, so I’m always happy to see him. We talked about the future, and all the energy that goes into a well groomed and interesting blog. I started this blog to have a place to write about stuff I’m thinking about, and to be in charge of what people do with my name online. It’s never really been about popularity or “today’s outfit”…

Also, some great news that really made me happy: a Swedish company called Dohi Entertainment have bought the IP of MilMo! They have stated on MilMo’s developer blog that the game will go live again, that all avatars and items will be intact! So all you MilMonauts, get ready to play your favorite game again! 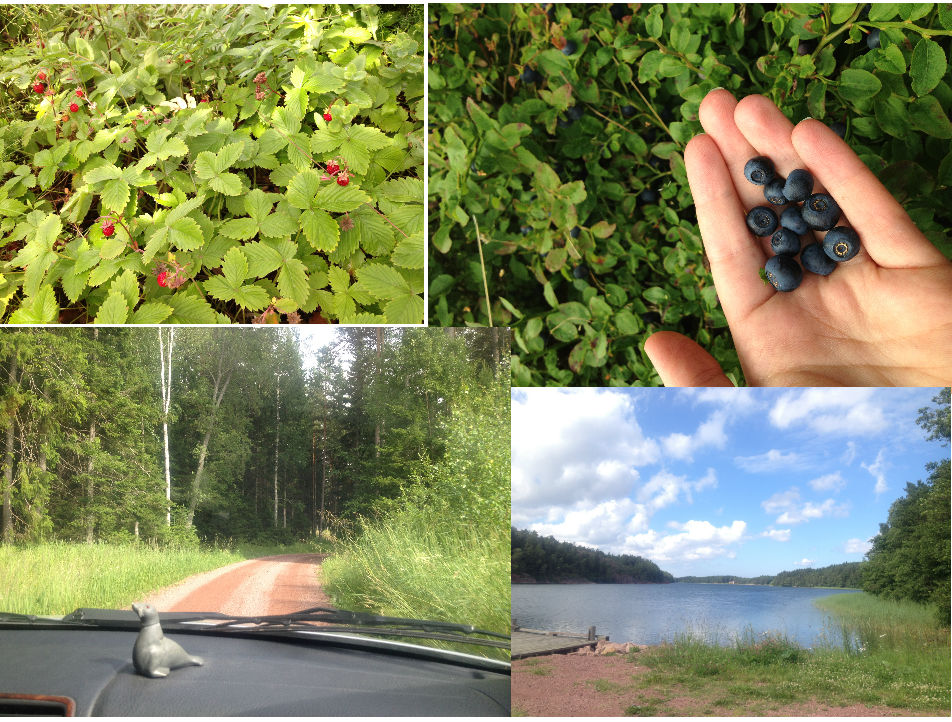 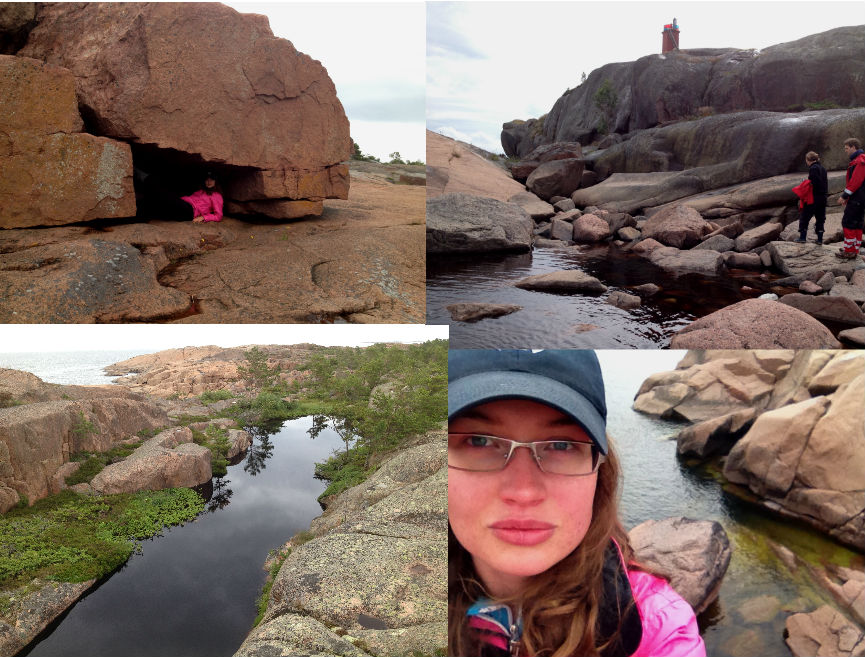 We climbed rocks and went adventuring on an abandoned island with old Russian forts on it.

Spent the weekend at a friend’s summer house, here at the Åland Islands. Åland (a bunch of small islands in the ocean, right between Finland and Sweden), consist of something like 6000 small islands, most of them totally empty from people. Me and my friends explored caves, went for a swim in the ice cold water (it’s summer here and the water is supposed to be warm, but for now it’s only abut 16 degrees Celsius?!). I even climbed 4 meters up on a rock, squeezed myself trough tiny cracks and felt quite proud when we reached the top.

Went to Finland this Easter. In other words I went Home. With a big “H”.

Sometimes I forget I actually moved abroad 4,5 years ago to study and work. Sweden and Finland are kinda the same, except for some fun cultural stuff and the language.

Anyways, until I got my my pictures from the Easter vacation in Finland, here’s some photos from last time I went Home. The pictures are taken by my dear friend Julia. Click here to visit her blog. She is drawing all her blog pictures using paint! 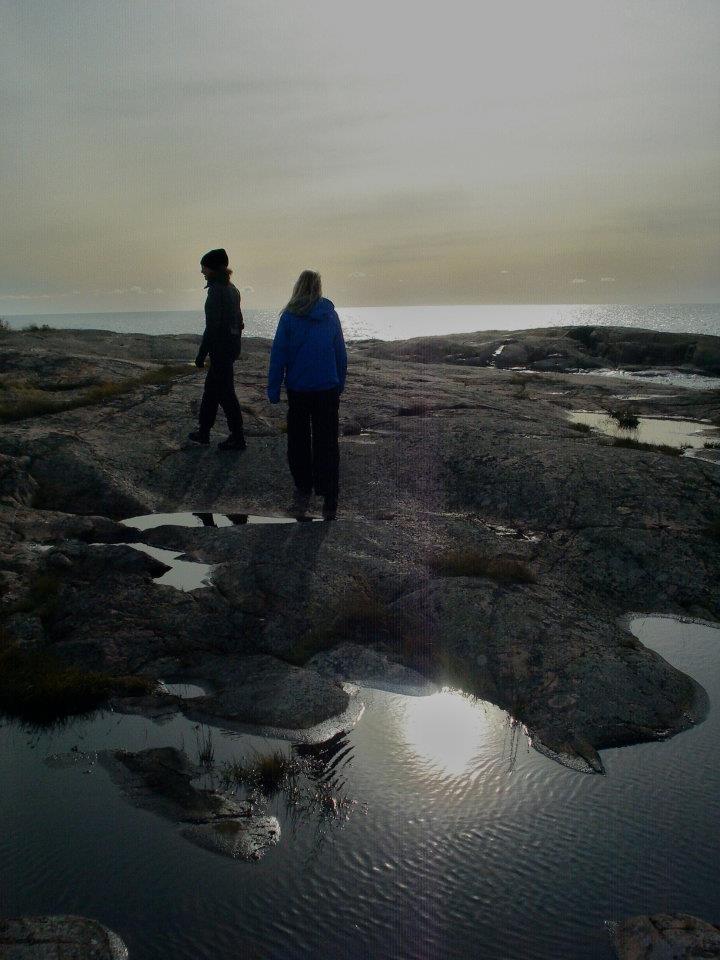 A walk by the sea. I love being in the nature! 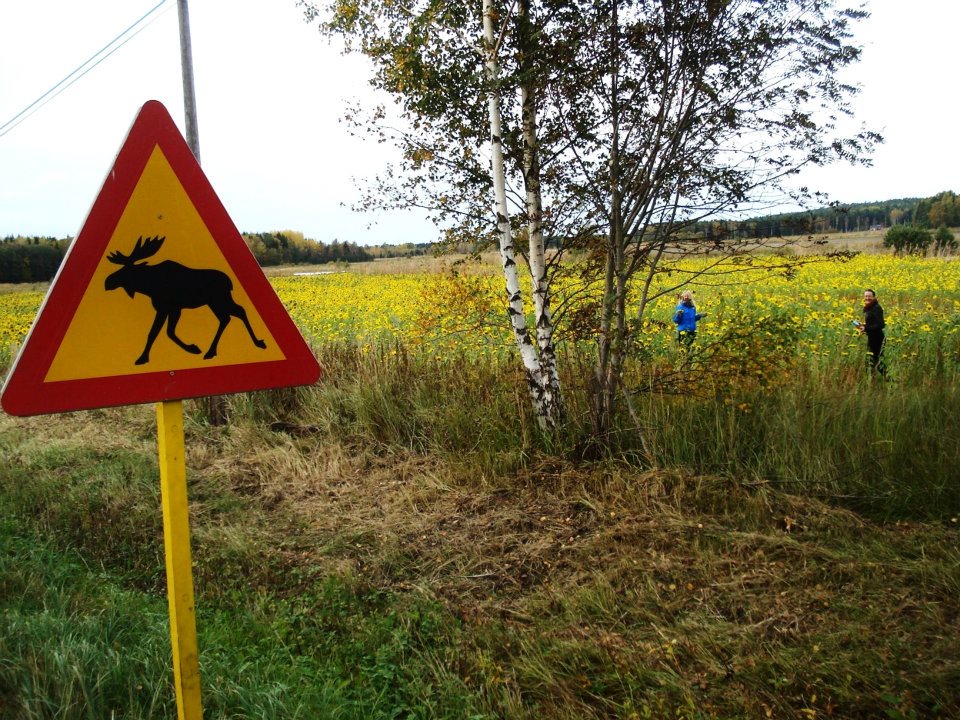 There's a lot f wildlife where I come from xD 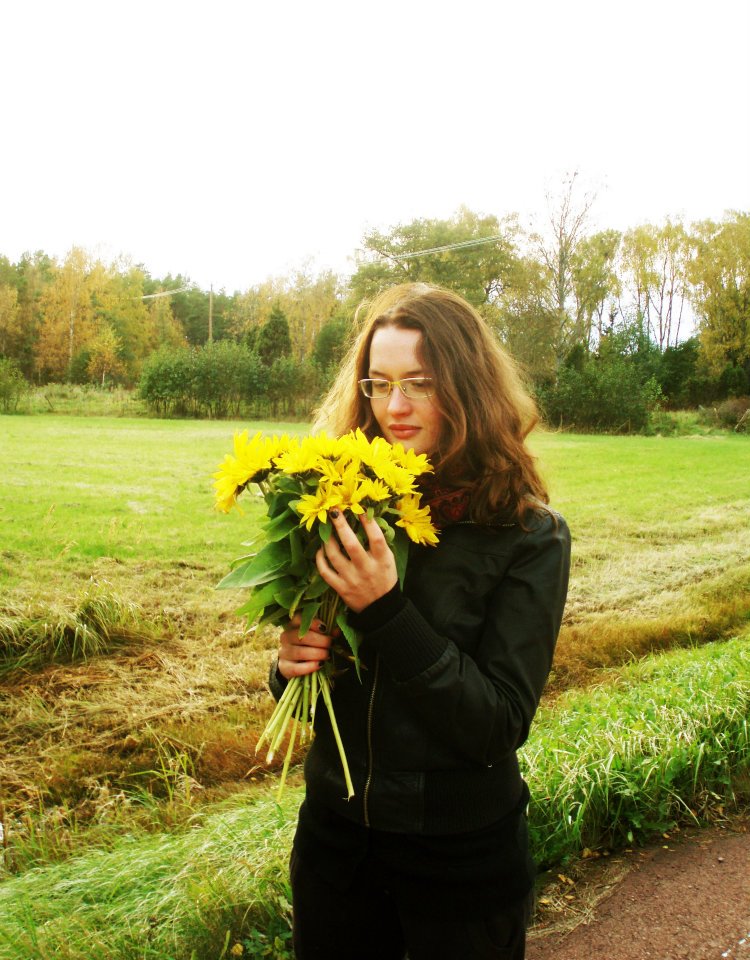 We found a field full of sun flowers, late fall of 2011

They say there’s a possibility of seeing northern lights today. 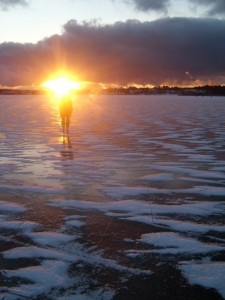 Picture from when I still lived in Finland, taken by my dear friend Hannus. In Finland it gets really cold during winters. I’m actually standing on the frozen sea. Some years the ice is so thick people get into their cars and drive over the sea to Stockholm, the capital of Sweden…