The secret is out! Last week Paradox North finally announced the game “Magicka: Wizard Wars” at Game Developer’s Conference in San Francisco! I’m finally able to talk about why Paradox hired me in the first place, haha! I might have been all over the place at Paradox, involved in the overall metrics pipelines of the company, but this is actually the project John pitched to me back in August/September 2012.

M:WW is a super intense action pvp game, based on the original Magicka game developed by Arrowhead and published by Paradox Interactive, back in 2011. Wizard Wars is not really a MOBA game like League of Legends or DotaA. It’s a bit more like a beat em’ up, taking advantage of Magickas advanced spell system and chaotic friendly fire. If you ever played Magicka you know the basic gameplay is a fun toy in itself, combining 10 elements of nature. I think there’s something like 1123 possible combinations in the original game. Ever since Magicka was released fans have been complaining about the lack of a stable PvP experience, and I’m pretty sure this is exactly what those players are waiting for! 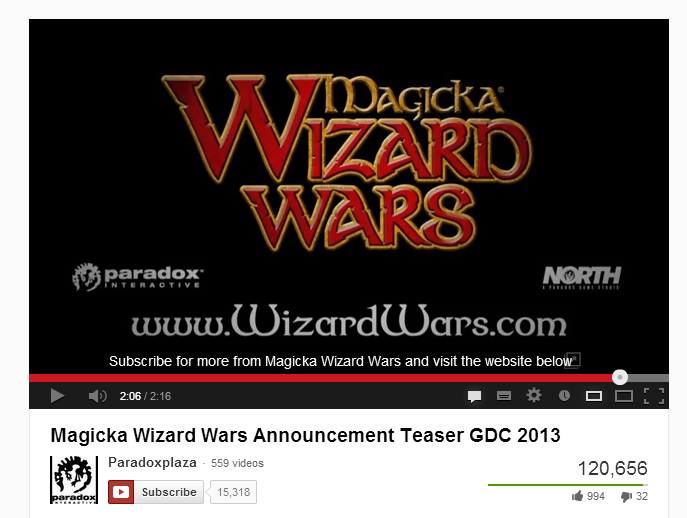 The epic announcement trailer for Wizard Wars! If you like Game of Thrones you are in for a treat. Click the picture to start the video.

The game is developed by the internal Paradox studio Paradox North, and published by Paradox Interactive. We playtest the game daily and I have so much fun playing it! It’s really the best time each day, when the whole team gather around to kick some ass in teams of 4 on 4 team fights. So far I’ve been playing for 60 hours, and I still find new ways to play the game. It’s very easy to pick up, but I sense this game is going to attract some very hardcore gamers, that kind who like to grind Street Fighter for years or play LoL professionally.

Speaking of Magicka-related stuff and what I do for a living when I’m not drawing or derping, Paradox and Ludosity just released the tablet game “Magicka: Wizards of the Square Tablet“! The game scored 90 on Metacritic after its first 4 reviews, which is amazing! I think It’s my first Metacritic rated game ever since I did some QA on Puzzlegeddon for Pieces Interactive in 2009. 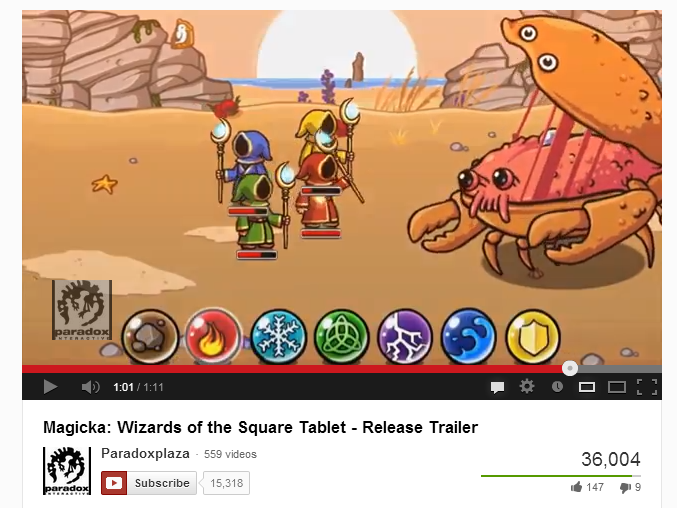 Gameplay trailer for the all new “Magicka: Wizards of The Square Tablet”! Click to start the video!

Wizards of The Square Tablet is a bit of a milestone for me personally. It’s the first game where I’ve been part of the metrics process all the way. I got to have a say in what game specific metrics should be tracked, to make sure the standard protocol that applies to all Paradox games was implemented, test the pipeline, involve QA in the process, beta, the launch of the game and finally construct SQL queries and write a report about the data for the producers. It really struck me yesterday, I do games for a living…!

I know not even my close friends really seem to get what it is that I do for a living. I have done some community management, but I mainly focus on game data. That is I collect data from games and reality check how players really play the game. I usually say I do “reverse engineered game design”. It started when I was the in-game shop manager for the MMO “MilMo”. I tried to find out what items the players seem to like, and at the same time Zynga’s Facebook games arrived to the scene and game data became the big thing. But this is another story, haha!